'When The Day Had No Name': Berlin Review 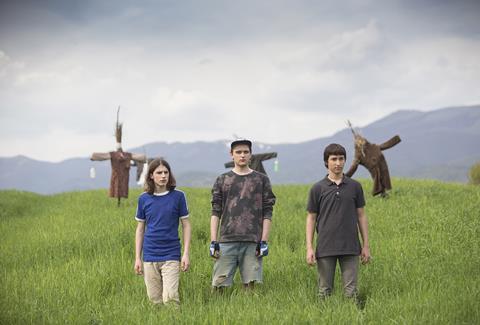 Macedonian director Teona Strugar Mitevska uses a real-life crime, the unsolved murder of four teenagers, as a jumping-off point to explore the entrenched machismo, aggression and cultural tensions which blight her country. As such, this is a gruelling and confrontational watch which bluntly makes the point that Macedonia’s hopes for the future can’t coexist with a masculinity which is rooted in the past.

Shot in shades of despair and ennui, with a backdrop of graffiti slogans which read “No Future” and “Don’t Trust Women”, the film has a pressure cooker atmosphere of building tension

The bleak subject matter, captured with an unflinching lens by Agnes Godard, makes this a tough prospect, even within the Balkan region. This is a picture which will play best to sophisticated festival audiences which may appreciate the director’s naturalistic approach and the unvarnished honesty of her portrait of Macedonian teens.

To be a teenage boy in Macedonia is to be preoccupied with status. Milan (Leon Ristov) has money, but is forced to share his concrete mansion with a stepmother he can barely bring himself to speak to. He is in a covert relationship with Renata, but since she is plump and not admired by his contemporaries, he can’t quite bring himself to take her to the school prom. His best friend Petar (Hanis Bagashov) comes from an impoverished background. His father has left, his mother gazes at TV melodramas all day rather than confront the tragedy of her own life. And sexually inexperienced Petar is nursing a not-so-subtle crush on Milan. Together with their friends Ace, Vladan, Rapoe and the wheelchair-bound Cvetan, the boys plan a weekend fishing trip. But first, they loll around skeletal kids’ playgrounds, bickering and boasting.

Shot in shades of despair and ennui, with a backdrop of graffiti slogans which read “No Future” and “Don’t Trust Women”, the film has a pressure cooker atmosphere of building tension. The boys lash out at each other. But the real target of animosity, for some at least, are the Albanian muslims who live alongside them.

Before the fishing trip can commence, the boys embark on a ‘rite of passage’ – they queue up to take a turn, one by one, with a sad-eyed sixteen-year-old prostitute in grim little room above a bar. Mitevska keeps the camera in the corridor outside, observing the nervy jostling of the boys as they sit on the grubby linoleum, listening to the angry buzz of the strip lights and waiting for their moment. Inevitably, the visit goes wrong, and one of the boys injures the girl, who flees from the room, bleeding and weeping.

An ominous discordant violin drone on the score is hardly necessary, so potent is the sense of impending disaster. A drunken Ace courts trouble by abusing a car full of Albanian gangsters; Cvetan, disgusted by his friends’ activities with the prostitute, drinks himself senseless and is loaded into the boot of the car. “The future of Macedonia is female,” says a defiant Renata to Milan. It’s her story, rather than that of the boys, which seems the more rewarding to explore.