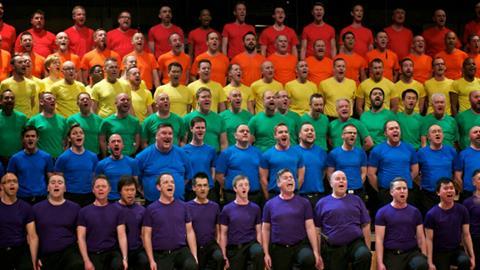 You’re 40. You’re a gay Israeli in London, far from your Orthodox family. You’re HIV positive, nurtured by your friends in the London Gay Men’s Chorus. And your parents say that they want you back home. This is the plight of Saar Maoz, protagonist of Who’s Gonna Love Me Now?, a documentary of guilt and introspection by Tomer and Barak Heymann.  Taking its title from the post-diagnosis despair of a man with HIV, this film distills a personal journey with the breadth of a reality series down to feature length.

Moaz’s mother weeps for her son’s future, while his drill instructor father asks “can’t you just take a pill for this?” or “why don’t you just call it the ‘men’s chorus’?

If ingredients were a movie, the Heymanns would have something substantial here – a troubled man facing middle age, a gruff father who trains paratroopers, a tearful Jewish mother, uncomprehending siblings with their own families, and cutaways to motivational songs performed by a hundred cheerful gay voices. Who’s Gonna Love Me Now? brings enough laughs to that mix to count on a long ride at festivals, especially Jewish film festivals worldwide, with some art house theatrical exposure before a berth on television in Europe and North America – although subtitles could diminish its range in the US.

We meet the affable Saar Maoz in London, where he sings in the Gay Men’s Chorus. He has HIV, due (he says) to binges with sex and drugs after a breakup with a longtime partner, and he works in an Apple store, which we never see. What next?

Always present, in background and foreground, is Saar’s religious family. We learn that he was forced out of the kibbutz where he grew up (still a source of embarrassment for his family), and that he’s been in London for nearly 20 years. His mother weeps for her son’s future, yet his drill instructor father has some simple answers that could come from The Simpsons or Family Guy – “can’t you just take a pill for this?” or “why don’t you just call it the ‘men’s chorus’?” He’s the kind of character that you can’t make up, and the film springs to life when he’s on the screen.

If that’s unconditional love, Israeli-style, with all its bristly built-in punch-lines, there’s another version of it in the gentle songs of the chorus in London, one of the rare places where gay men have strength in numbers. Central casting, once again, from the other side.

The Heymanns distill a gay comedy-drama from Saar’s struggle to balance the two (or more) sides of his existence, and what emerges is a doc that his or anyone’s mother could watch. Less heartwarming is the perennial story of a gay man colliding with the expectations of mainstream and conservative society. So much has changed that Israel can accept (and draft) gay soldiers into its army. So little has changed that Saar’s brother sounds as if his young family is under siege by the mere fact that his brother has HIV.

Itai Raziel’s camera, peering everywhere, gives Who’s Gonna Love Me Now? the feel of intimacy, yet we get closer to the heart of Saar’s paratrooper father than we do to Apple, Saar’s employer in London, despite the firm’s gay-friendly rhetoric. And, in a film about feelings, Saar’s London boyfriend is a pro-forma presence.

Production values are high, although the chorus’s sound quality could be far better, an indication that Who’s Gonna Love Me Now? is more about family than it is about friends.