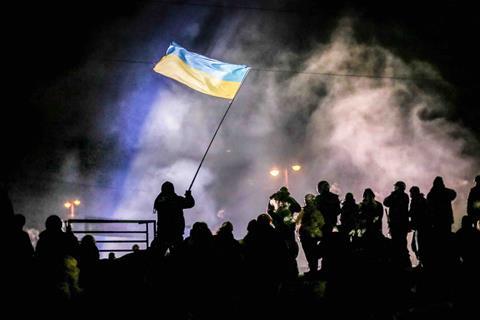 Evgeny Afineevsky’s new documentary about the bloody events which shook Ukraine during the winter of 2013-4 covers essentially the same ground as Sergey Loznitsa’s Maidan, which screened last year in Cannes. Delivering much the same information from a similar angle, this orginal Netflix documentary stands the chance of reaching a much larger audience, boosted by high-profile festival berths at Venice, Telluride and Toronto. And that audience will know by now that this is only one chapter in an ongoing saga that is far from over, with no definitive end in sight yet.

More like the testimony of an enthusiastic, fully committed supporter watching, in close-up, a population reclaiming its rights, Afineevsky’s film accepts as a basic premise that Yanukevych is the villain

A rich source of information on the dramatic events themselves, detailed and efficiently organised for Western audiences to follow without a hitch, Afineevsky’s film tends to focus mainly on the point of view of the man on the street. Less personal in style and approach than Maidan, it deals with the popular upsurge of discontent with the country’s leader, Viktor Yanukovych, who opted for an alliance with Putin’s Russia over the European Union. All the many other forces and interests involved in the conflict in Ukraine are left unexplored.

Afineevsky kept his cameras rolling through 93 days after unrest broke out in November 2013, during which an almost innocent student protest grew into a massive demonstration of close to one million people and turned Kiev’s Independence Square (better known now as the Maidan) into the symbol of the struggle for civil rights in a part of the world that had been deprived of it for so many years.

A vast team of cameramen (28 of them get credits on the print) chase the events in the best tradition of TV news reporting, with Afineevsky engaged in countless interviews taken in the heat of the rebellion and coming back to some of them months later to complete the narrative.

Underlining the absence of any distinct political ideology behind the uprising, Afineevsky repeatedly suggests it came simply from the people who, having tasted liberty and freedom of choice, spontaneously refused to bow any longer to the military police, to their truncheons or even their guns shooting not just rubber bullets but live ones as well.

Despite the punishing cold weather of the Ukrainian winter and the ferocious beatings of the Berkut (the military police), later backed up by battalions of Titushkys (criminal convicts drafted for the occasion to help the “law”), without any weaponry of their own but armed with the deep conviction that if they do not prevail now, they never will, these demonstrators managed against all odds to chase Yanukevych away to Moscow, which granted him asylum.

Consistently avoiding any attempt at political analysis, Afineevsky’s cameras show ever-expanding crowds, young and old, men and women, Christians, Jews, Muslems, academics and proletarians, all united under the one common cause, the removal of a man who, in their eyes, embodied the concept of corruption. Often exasperated by the politicians who were supposed to represent them and who cheated them, these people were willing to die, if necessary, to achieve their goal, displaying an idealistic fervour (i.e. the joined support of all religions) rarely encountered in normal circumstances.

More like the testimony of an enthusiastic, fully committed supporter watching, in close-up, a populatoon reclaiming its rights, Afineevsky’s film accepts as a basic premise that Yanukevych is the villain. Anyone who differs should look elsewhere. Will Znidaric’s cutting is brisk and energetic, and it’s no surprise to note that two-time Academy Award winner Angus Wall (editor of the Social Network) is on the production team.