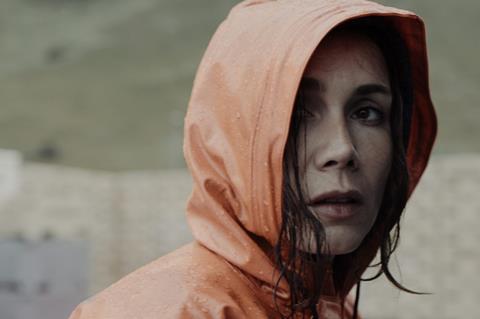 Writer/director Arni Olafur Asgeirsson died earlier this year as Wolka was in the final stages of post-production. The film stands as a testimony to his talent and is a well-crafted thriller with emotional heft and commercial appeal. Fans of The Girl With The Dragon Tattoo and flinty Scandi noir-style mysteries could provide a plentiful target audience.

Asgeirsson and co-writer Michal Godzic borrow from familiar genre tropes in westerns and film noir, setting the story of a criminal on the run and a mysterious stranger within a remote, tight-knit community on Iceland’s Westman Islands. The intriguing premise and the craggy, atmospheric locations carry the film a long way before it starts to flag in the closing stages.

The badass credentials of the central character are quickly established. On the brink of being released from prison, Anna (Olga Boladz) is confronted by an inmate threatening a loved one who will remain behind bars. She responds by smashing the woman’s head against a brick wall. Clint Eastwood would not have handled the situation more decisively. Sporting tattoos and oozing attitude, Anna is someone who can take care of herself.

Cinematographer Marek Rajca bathes the early prison scenes in a sickly green hue, conveying a gloomy, graphic-novel vision of a hell on earth. The outside world is little better as Anna returns to a ghetto of dingy flats and shadowy danger. The contrast comes when she acquires a forged ID card, leaves Poland and heads to a corner of Iceland where (conveniently) half the population are Polish. Here there are open spaces and room to breathe. Misty mountain tops dominate, and the seas act as a buffer to the worries of the mainland. No wonder Anna finds it a place of refuge.

Anna has broken her parole to go in search of Dorota (Anna Moskal), who reacts as if she has been visited by a ghost. There is a hint of David Cronenberg’s A History Of Violence here as a reminder of the past comes to pay a call. Dorota’s kindly, unsuspecting husband Krystian (Eryk Lubos) is welcoming whilst Dorota’s teenage son Tommi (Jan Cieciara) is immediately drawn to this disruptive figure in their strait-laced midst.  Anna soon has a place to sleep and a job at the local fish factory.

Asgeirsson maintains a sense of intrigue in the developing cat-and-mouse situation as he gradually fills in the missing pieces of connections and motivations. He mostly manages to stay one step ahead of the viewer with the little twists and revelations. Anna’s scheming pays off a little too easily at times, and nothing she does seems to attract the attention of the authorities. We are still successfully carried along by the need to know what happens next and by Boladz’s hardboiled performance.

But the more we learn of what is happening, the more conventional the film starts to feel. Anna’s sentimental side and yearning for a taste of a more settled life make the character more rounded, but tend to soften the film’s spikier intentions. The unravelling of events and relationships disappoints after the earlier stages promised something with a little more sting.