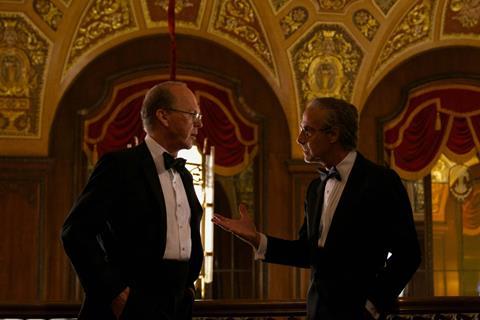 “What is life worth?” asks attorney Kenneth Feinberg (Michael Keaton) to a group of his law students in this somber drama. In the classroom, Feinberg is quick to arrive at an answer—a number negotiated upon between a hypothetical aggrieved widow and the company that was arguably responsible. But in the real world, Feinberg learns it’s not so simple.

Keathon gives the character an amiable charm beneath the bookishness

Based on the actual behind-the-scene wrangling that took place around the September 11th Victim Compensation Fund in the wake of the 9/11 attacks, Worth addresses exactly what its title suggests: How can you put a value on the loss of someone’s loved one? Proficiently directed by Sara Colangelo (The Kindergarten Teacher), well-acted by Keaton and co-star Amy Ryan as Feinberg’s deputy Camille Biros, and made with the respect and reverence that its subject deserves, Worth nevertheless remains a bit too stolid and too on-the-nose. And even after all of its lessons about human value, the film’s plot actually turns on whether or not Feinberg and his team — previously the subject of the 2017 documentary Playing God — can convince a minimum number, 80%, of alleged victims to sign up for the fund.

Initially, Feinberg is strictly a number-cruncher who is shielded from the rest of the world. He listens to opera on his headphones, so much so that during the 9/11 attacks he was the last on his D.C. commuter train to even notice the smoke from the Pentagon. Believing he can serve his country in its time of need, he signs up to oversee the Victims Fund pro-bono with the best of attentions. But because the Victims Fund was set up to allay potentially costly lawsuits that could cripple the airline industry and the U.S. economy, Feinberg finds himself perceived to be less of a public servant, and more as a corporate shill, offering “bloody money” to the families to make sure they don’t sue.

Feinberg’s initial plan is to pay families a certain amount of money based on the income of the deceased. But after he meets and interacts directly with survivors, especially Charles Wolf (Stanley Tucci), a community organiser whose wife died in the towers and is campaigning to “fix the fund,” Feinberg starts to learn that a one-size-fits-all approach isn’t going to work.

Worth emphasises two particular cases that throw a wrench in Feinberg’s formula: a gay man from Virginia whose partner died at the Pentagon, and whose parents denied their relationship, and a firefighter who, Feinberg learns, had a wife and three boys, but also two kids with a mistress who are also seeking funds. While their stories are minor compared to the film’s focus on Feinberg, they are certainly more emotional. Indeed, the film’s most heartbreaking sequences involve testimonials from the victims’ surviving relatives—one particularly devastating monologue comes from a woman talking about her last phone call with her husband as he was trapped in the towers.

But Worth, in an odd way, wants to make a hero of Feinberg, whose biggest revelation is learning to look at people as human beings and not numbers. “I can’t bend the rules,” he says. And then, over the course of the story, he does. It certainly helps to have Michael Keaton starring as Feinberg; he gives the character an amiable charm beneath the bookishness. The always excellent Amy Ryan, here playing a straight-laced attorney with a slightly bigger heart than Feinberg’s, has a few genuinely affecting moments as the character comes to grips with the multitudes of personal suffering involved in the Fund project.