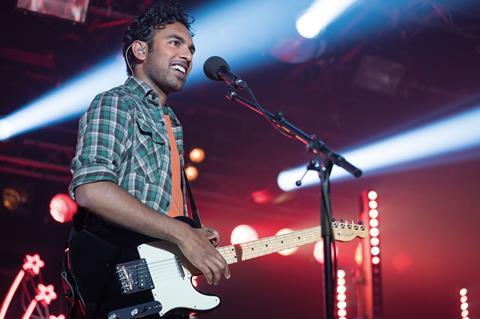 What if, suddenly, you were the only person in the world who not only remembered The Beatles, but, as a struggling singer-songwriter, could perform their entire catalogue? The previously edgy director Danny Boyle and the decidedly non-edgy writer/director Richard Curtis have joined forces for Working Title’s Yesterday, a charming high-concept romantic comedy with a Fab Four soundtrack which puts Bohemian Rhapsody to shame.

Boyle deals efficiently with some of Curtis’s weaknesses – the story is set outside West London and the cast is multi-cultural, which may broaden the audience. But Strawberry Fields-full of schmaltz clearly identify this as coming from the same pen that wrote Notting Hill and Love, Actually, and that should also play to Universal’s commercial benefit when Yesterday releases globally in late June after closing the Tribeca Film Festival. The raw energy which propelled Boyle’s Slumdog Millionaire has dissolved into the Suffolk cider, but there is still enough to savour here (cameos from Ed Sheeran, James Corden, hit-and-miss jokes and, yes, those songs).

Yesterday, which stars British soap actor Himesh Patel (Eastenders) and a radiant Lily James, starts out with a Boyle-ish zing – nice inter-titles, a brisk pace - and Patel is gifted vocally, a charming performer if anxious actor. By the end, the film is tripping over its tropes as star-crossed lovers race across town delivering corny mea-culpas. Throughout, though, we have the music, taken out of its context and presented afresh, and there’s a soft-old-slipper comfort in watching Curtis knock it out with a new generation of beautiful young actors.

The film starts out briskly, with Jack Malik (Patel) as a struggling singer-songwriter who is about to give up and and go back to work as a teacher when he is knocked down by a bus in the middle of a global electricity outage. When he awakens in the hospital, there’s been a rather random hiccup in the time-space continuum: nobody has heard of the Beatles. (Even more randomly, Coke doesn’t exist either, or cigarettes. The disappearance of Oasis is more logical.)

Jack can’t resist the opportunity to cash in on this good fortune, first by presenting ‘Yesterday’ as his own song and moving on to appropriate the entire Beatles back catalogue. Nothing much changes at first, and he carries on with his job in a supermarket warehouse, until he’s spotted by Ed Sheeran and invited to be support on the singer’s tour (he sings ‘Back In The USSR’ at a Moscow gig). He’s approached by the rather marvellously amoral Hollywood agent Hannah (Kate McKinnon), and soon they’re planning the release of the biggest album in the history of music.

None of that matters, however, when Jack suddenly realises that his greedy quest for fame and fortune may have cost him his childhood best friend and stalwart supporter, the girl-next-door Elly (James).

There’s no doubt that Working Title is playing in its comfort zone here, and there’s a slick format to this very British comedy which can’t be disguised by its ‘ordinary’ lead actors drinking beer and eating crisps in the country (lovely pubs, sunny beaches). This attempt to open the film out is signalled by Patel as the lead with the genial Joel Fry as his doped-up roadie (a game, if wooden, Sheeran is subjected to gags about leaving rap to “the brothers” from Fry.) But Yesterday is a film we’re all familiar with, for better or worse.

Himesh Patel is appealing, if a little buttoned-up. Lily James cements her standing as Britain’s sweetheart. And Boyle works with his tight-knit creative team to professionally deliver what it says on the Working Title tin. The only real risk taken in this project is by Kate McKinnon, putting some dark spin on her delivery of the venal Hollywood agent archetype and making it her own. She’s a delight.

Screenplay, Richard Curtis from a story by Curtis and Jack Barth