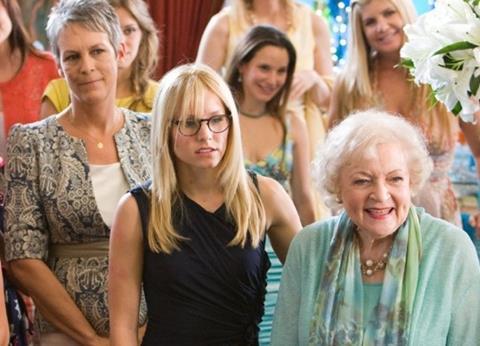 Yet another contrived, manically pitched romantic comedy centered on forcedly farcical nuptial hijinks, the wearyingly unfunny You Again is the cinematic equivalent of a loud, sugar-fueled kid desperately calling for his or her parent’s attention from a pool.

Apparently, since Dancing With The Stars is wildly popular on the American small screen, several dance sequences substitute for back-and-forth banter.

Sandwiched between more interesting comedy competition in the form of Easy A and The Virginity Hit, the movie should face an uphill climb at theatres. Holdover affinity for Sigourney Weaver and Jamie Lee Curtis, and the film’s split-generational casting (plus the appearance of Betty White, a misleading focal point of Stateside television advertising, given her relatively paltry screen time) could capture a disproportionate boomer audience share and give the movie a slight bump, but appropriately deadly word-of-mouth will likely dampen its theatrical commercial grosses, relegating it to programmer status in ancillary markets.

When young, unattached PR professional Marni (Kristen Bell) returns home for the wedding of her older brother Will (James Wolk), she discovers he’s marrying Joanna (Odette Yustman), a former classmate who made her high school years miserable. Her family loves Joanna, though, so when she pretends not to remember Marni, there seems to be little Marni can do. Passive-aggressive gamesmanship ensues. Things get further complicated when it’s discovered that Marni’s mother (Curtis) has her own thorny past with Joanna’s aunt Ramona (Weaver), her former best friend.

There is an interesting and even quite possibly very funny movie to be made about the manner in which women filter their competitiveness with one another through men, but You Again is so divorced from the real world as to immediately negate that possibility. Eschewing logic, debut screenwriter Moe Jelline’s script requires that characters not talk to each other about strange behavior, and hold secrets only for the sake of narrative convenience.

Apparently, since Dancing With The Stars is wildly popular on the American small screen, several dance sequences substitute for back-and-forth banter. After trading in much slapstick early on, the movie moves awkwardly toward melodramatic reconciliation in its finale. Worse, it even gets little details wrong (an unearthed high school time capsule with interviews from 2002, crucial to the plot, is stored on videocassette).

Director Andy Fickman (The Game Plan) stages sequences in choppy and unimaginative fashion, and Nathan Wang’s goosing score is especially intrusive. Fickman’s encouragement of his actors to play it broad means wincing is evoked from all around, but Kyle Bornheimer, as Joanna’s jilted ex-boyfriend, turns in something slightly subversive and emerges unscatched.