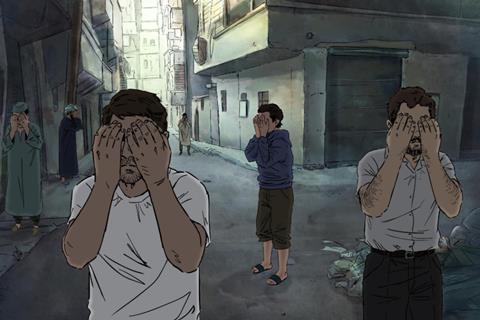 Activism and animation make formidable allies in Zero Impunity. Nicolas Blies and Stéphane Hueber-Blies’ crusading transmedia documentary offers a stirring call to arms as it draws attention to the systematic use of sexual violence and rape as weapons of war. A wide-ranging, eye-opening film, it should attract the attention of serious-minded audiences willing to confront the subject matter and previously supportive of animation titles ranging from Waltz With Bashir to Another Day Of Life.

The use of animation could be distancing, but instead brings discretion to the material and avoids sensationalism

The filmmaking brothers argue that sexual violence is not just part of the collateral damage in global conflicts, instead it is a weapon consciously used as an expression of power and domination. There are no countries who are beyond reproach. Public outrage would seem to be a given but there is a surprising level of indifference to the subject; hence the Zero Impunity movement’s determination to raise awareness. Expert testimony from investigative journalists, academics and politicians has been recorded and projected on to buildings in major cities (Paris, Washington D.C etc) as part of an attempt to make the subject more present in people’s lives.

Divided into five chapters (Licence To Rape, Blind To Reality etc), the film’s heart lies in the way it gives a voice to victims. The personal testimony of survivors is related in sensitively handled animated sequences. The use of animation could be distancing, but instead brings discretion to the material and avoids sensationalism. Fatima in Syria talks of the fate of her 11-year-old daughter Nora who was abducted and tortured. Alisa in the Donbass region of the Ukraine speaks out against a conflict in which men “think they can do anything”. A former Guantanamo interrogator details the human rights abuses there. Emphatic fades to black provide the viewer with pauses for refection.

The danger with a film – and a movement –like Zero Impunity is that it risks preaching to the converted. The point here is that there are so few who are converted. In America, one member of the public illustrates a widespread belief that the ends can justify the means: “I don’t agree with rape,” she claims, “but I do agree with torture”.

Hard-hitting in the way it address the Bush/Cheney administration in America and the policies employed at Guantanamo Bay and Abu Ghraib, including rectal feeding, the film is equally tough on the United Nations. According to the filmmakers, this is an organisation that seems more intent on protecting its image as a peacekeeper than addressing the behaviour of its own staff. An interview with former UN Senior Investigator Peter Gallo ( depicted in animation and live-action) is especially damning.

The photo-realist animation throughout captures the changing landscapes and tones of a tale that journeys from sweeping deserts to cramped cells, from the Kivu region of the Democratic Republic of the Congo to the sewers of New York city. The animation is impressive in its own right but is just part of a fresh, urgent approach to engaging audiences and giving the Zero Impunity movement a higher international profile.