Rise Of The Legend 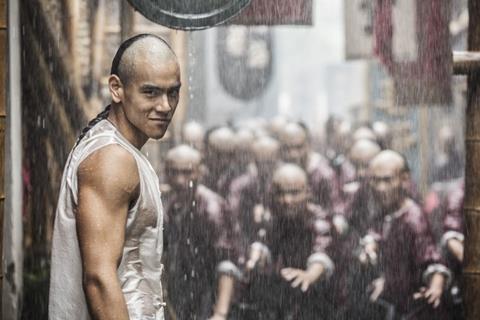 All parties involved should consider Rise Of The Legend a job well done, succeeding as both an entertaining and relevant action period piece, but more importantly as a robust primer on which to launch a new series of Wong Fei Hung adventures.

Guangdong’s Pearl River Delta, 1868. While the ruling Qing Dynasty has imposed heavy trade restrictions across the country, rival underworld gangs vie for control of portside ferry piers, which in turn dictate control of numerous profitable industries including labour, gambling, opium and prostitution. Master Lei (Sammo Hung), leader of the Black Tigers challenges a boatload of potential new recruits with the seemingly impossible task of delivering the head of the leader of arch rivals The Northern Sea Gang. When a feisty young hopeful named Little Fei (Eddie Peng) completes the mission, he is adopted as Lei’s fourth son, and taken under the master’s wing.

Of course all is not what it appears. Fei is out for revenge against the Black Tigers, who murdered his father (Tony Leung Ka-Fai) - a benevolent teacher and doctor who ran the local orphanage. Since that day, Fei and his brother Fiery (Jing Boran) have been training in martial arts, determined to see out their dream or ridding the community of evil forces. Once embedded within the gang, Fei sets about playing his three older “brothers” - North Evil (Jack Feng), Black Crow (Byron Mann) and Old Snake - against each other, while plotting a heist of the gang’s well-secured vault.

Somehow, Fei still finds time for romance. Pining for a childhood sweetheart, Little Fa, who was sold into prostitution, Fei also harbours feelings for the beautiful and resourceful Chun (Wang Luodan), for whom the attraction seems to be mutual. Neither of them can act, however, as Chun is involved with Fei’s brother, and leader of the newly formed Orphan Gang, Fiery. Instead, Fei seeks solace in the company of devoted courtesan Orchid (Angelababy), in whom he confides his feelings, concerns and plans for restoring righteousness to the land.

What is immediately apparent within moments of Rise Of The Legend, is that Chow and his production team are dedicated to resurrecting the Wong Fei Hung of Tsui Hark’s Once Upon A Time in China series. From the art direction to the fight choreography, everything is lovingly evoked in almost reverential fashion. To Chow’s credit, he manages to do this without simultaneously hobbling his own film. Christine To’s script manages to play as equal parts historical drama, martial arts actioner and undercover heist thriller, while never truly surprising its audience at any point. Despite the lack of innovation in the narrative, Chow has delivered a slick and polished production that holds the attention and satisfies far more convincingly than either of the writer and director’s previous collaborations, Murderer (2009) or Nightfall (2012).

Interestingly, producer Sammo Hung gives himself top billing, in a film that clearly belongs to Eddie Peng. The Taiwanese born performer broke out in athletics drama Jump Ashin! (2011) before hitting the big-time opposite Nick Cheung in last year’s smash hit MMA drama Unbeatable. It was no mean feat to take on such an iconic role - Wong Fei Hung is perhaps the closest thing  Chinese cinema has to a superhero. The character has previously been immortalised on screen by such legendary martial artists as Gordon Liu (Challenge Of The Masters), Jackie Chan (Drunken Master) and Jet Li (Once Upon A Time In China), but on the basis of Rise Of The Legend, Peng has a great opportunity to make the role his own for a new generation of moviegoers.

Chow and action director Corey Yuen capitalise on every opportunity to show off Peng’s physique and athletic prowess, staging a series of thrilling fight sequences that employ a variety of weapons and martial arts styles. Chow and cinematographer Ng Man Ching make convincing use of the stereoscopic 3D as well, staging many action sequences in alleyways and warehouses where they can make full use of the added depth of field. While the strong argument remains that 3D is always an unnecessary gimmick, Chow’s use of the space might be the best such example in Chinese cinema since Tsui Hark’s Flying Swords of Dragon Gate.

Just weeks after Donnie Yen appeared to formally relinquish his title as reigning martial arts supremo in Teddy Chen’s Kung Fu Jungle, it is reassuring to see Peng emerge as such a competent successor. In fact, 2014 has seen a number of notable contenders finally get their chance to shine, including Philip Ng in Wong Ching Po’s Once Upon a Time in Shanghai and Wang Baoqiang, who completely eclipsed Yen as the deadly villain of his latest outing. Peng even has the looks and talent to impress when not stripped to the waist and pummeling respected adversaries, like Sammo Hung or The Grandmaster’s Zhang Jin. The (martial arts) world may soon be in the grip of Eddie Peng fever.

Performances all round are strong, without anyone coming close to eclipsing Peng and his grasp of the spotlight. Sammo’s mighty presence makes for some exhilarating action, while maintaining a menace through minimalism when not fighting. Jack Feng chews the scenery as the scheming, power-hungry “first tiger” North Evil, while Zhang Jin is somewhat underused as the vengeful son of the headless Northern Sea leader. Same goes for Angelababy, who has been able to balance her incomparable beauty with some efficient screen fighting of-late, in films such as Tai Chi Hero and Young Detective Dee: Curse of the Sea Dragon, but here is relegated to frail canoodling and mournful gazing.

Wang Luodan lands the more substantial of the film’s two female roles, as the much sought-after Chun, but even her role is more that of trophy woman/personification of redemption rather than a fully formed character, but at least she gets to run and fight a bit. Comedian Wong Cho Lam also has a slightly bizarre, underwritten turn as “Big Tooth”, introduced as Fei’s comic sidekick before being sidelined for much of the film. He emerges late on, to proclaim himself a martial artist, but ultimately his role his neither funny nor pivotal enough to warrant the casting of such a prominent comedian.

Overall, all parties involved should consider Rise Of The Legend a job well done, succeeding as both an entertaining and relevant action period piece, but more importantly as a robust primer on which to launch a new series of Wong Fei Hung adventures. Coupled with Eddie Peng, suited and booted to become the martial arts hero of tomorrow, and it is safe to consider this particular legend arisen and ready for action.