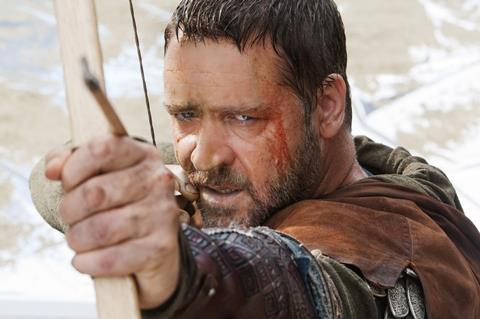 Ridley Scott’s take on the classic British legend of Robin Hood went straight to the top of the UK chart for the May 14-16 weekend, with a healthy gross of $8.3m (£5.8m) from 537 screens for Universal Pictures International. Screen average was a very decent $15,400 a print. Robin Hood denied Paramount Pictures International’s Iron Man 2 a third week at number one, with the comic book sequel dropping 50 points to a three-day total of $2.3m (£1.6m) from 491 screens.

Only two other new entries made it into the top twenty this week, with Artificial Eye’s Vincere and Verve Pictures’ American: The Bill Hicks Story, which placed 18th and 19th, respectively. Vincere, a France-Italy co-production which focuses on Ida Dalser, the mother of the only illegitimate child notorious womaniser Benito Mussolini ever acknowledged, took $38,900 (£26,300) from 12 screens, while American: The Bill Hicks Story, a documentary about the life of the cult comedian, grossed $34,200 (£23,700) from 13 screens.