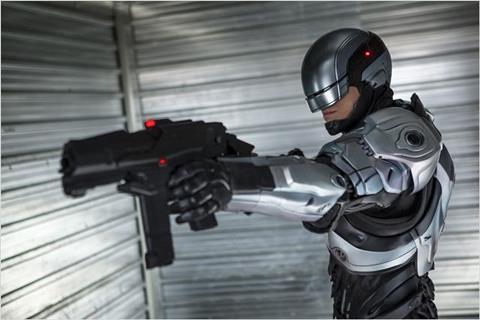 The re-booted and re-suited RoboCop delivers enough family-friendly fantasy adventure to keep action fans happy – especially since they are largely starved of such product during awards season – but while certainly watchable and extremely well made, it quite simply lacks the visceral jolt of Paul Verhoeven’s 1987 original which relished a sense of satire amidst its heady ultra-violence. Certainly the more sophisticated special effects that drive this new version add plenty to the already smart concept and a strong cast take it all extremely seriously, but despite a few classy effects-driven moments it spirals to a rather flat and forgettable ending.

Though slick and occasionally exciting, RoboCop rather fizzles out as it heads towards a climax that is set up to be grandstanding but ends up a rather familiar and less than imaginative stand-off.

Of course it is often unfair to judge a re-make against an original film, and in many cases the new upgraded version will be aimed at an audience that might not even know there was a film with the same title more than 30 years earlier, but the novelty value of what made the original a success (and therefore ripe for remake) needs to be kept intact. With RoboCop the new version is efficient, smartly scripted, nicely performed (and offers some astute analogies to the current use of drone warfare) but quite simply lacks a much-needed edge.

The film opened at the end of January in some far Eastern territories and in the UK, Australia, France and other European countries prior to to its February 12 release in the US through Columbia Pictures. Strong anticipation and a savvy marketing campaign should see it open well, but whether it has the legs to dominate the box-office seems unlikely, but it should still be a strong action performer.

The film, set in 2028, opens with – and is punctuated by – Samuel L. Jackson’s slyly funny (and almost film-stealing) turn as gung-ho television talk-show host Patrick Novak, whose main role seems to be to praise the worth of OmniCorp, a multinational which wants to bring in robot drones – which police the streets of Iran to bloody effect – to the streets of the US. All that is in the way seems to be a liberal politician (he wears a bow-tie, therefore must be a lily-livered liberal) who has convinced fellow politicians that robot policing is not a smart way to go.

But when honest cop Alex Murphy (Joel Kinnaman from The Killing) is badly injured in an attempt on his life, OmniCorp topper Raymond Sellers (Michael Keaton) spots a way into the market, and coerces his top R&D scientist Dr Dennett Norton (Gary Oldman) to concoct  a part-man, part-robot policeman, offering the morals and conscience of a human combined with the hydraulics, armour and built-in gunpower of a robot.

OmniCorp envisions a RoboCop that will get the policing job done no matter what the cost, but no matter how great the technology Alex’s humanity still holds things back when it comes to getting the job done faster and more efficiently. So Sellers orders that his brain be tampered with so he feels no emotion – even when seeing his loving wife (Abbie Cornish) and young son – and becomes pure machine. But they didn’t count on the strength of his humanity…and the man starts to fight back from inside the machine.

The interesting spin on this new RoboCop is that the OmniCorp are simply about selling and marketing their product rather than trying to solve crime issue or run a city…it is simply about the dollars. Alex Murphy becomes their star product, so when things start to unravel they need to try and shut him down as speedily as possible.

Director José Padilha (who made Brazilian hits Elite Squad and Elite Squad 2) is a shrewd choice as director, and brings a sense of energy and verve to the film. Equally there is little to quibble about in terms of the casting. Gary Oldman is suitably nervy and moral as the scientist worried about his actions; Michael Keaton is all steely charm as the OmniCorp boss; Jackie Earle Haley has fun as the OmniCorp enforcer who dismisses RoboCop as ‘Tin Man’; Marianne Jean-Baptiste is impressive as the Detroit Police Chief and Jennifer Ehle and Jay Baruchel are smooth as Seller’s lackeys. The film, though, does lack a strong female lead – Abbie Cornish’s character is simply the warm and loving wife torn apart by her husband’s accident, which is rather a waste of such a good actress. At least in the original film Nancy Allen offered up a feisty and tough cop as Murphy’s police partner.

Joel Kinnaman has the looks and physique to play the action lead, though to a degree once inside the RoboCop outfit and with his visor down he can do little but replicate Peter Weller’s robotic moves from the original film. What Weller also brought to the original film was the pursed lip look so beloved of Christian Bale’s Batman, that enabled him to give RoboCop a sense of character even when he seems to be all machine. Kinnaman is better when the visor is up and you can see his warm-hearted eyes.

The slick effects are often very impressive, cleverly blending a sense of the ordinary with futuristic technology. Most striking are the scenes in Dr Norton’s lab when it is finally revealed how much of the human Murphy is actually inside the RoboCop armour. These scenes give Kinnaman a chance to play the man rather than the robot, and he make the most of these moments.

Though slick and occasionally exciting, RoboCop rather fizzles out as it heads towards a climax that is set up to be grandstanding but ends up a rather familiar and less than imaginative stand-off on top of a building. Somehow you expected more from such a big-budget remake. But then that is the underlying feeling about this new RoboCop altogether – it looks great and is fun at times, but somehow you expect and hoped for so much more from such a strong and established concept.

Screenplay: Joshua Zetumer and Edward Neumeier & Michael Miner, based on the film RoboCop