Room And A Half 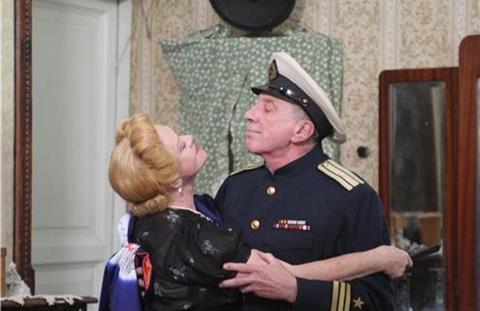 A multiple-award-winner in Russia for his animation work, Andrey Khrzhanovsky’s semi-fictionalised biography of Nobel prize-winning poet Josef Brodsky is a lively, dense and richly imaginative portrait not only of a great writer but also of the post-Second World War cultural world of the Soviet Union. Using live-action, documentary and archive footage as well as several types of animation and surrealist flights of fancy and some seven years in the making, Khrzhanovsky’s labour of love will be a festival and arthouse favourite with Russian communities abroad sure to embrace it.

Born in 1940 and considered the greatest Russian poet of his time, the liberal Jewish writer was exiled from his beloved homeland in 1972 never to return. Awarded the Nobel Prize for Literature in 1987, he died an American citizen in 1996. Khrzhanovsky imagines Brodsky returning home and uses the journey as the starting point for his flashbacks with the older Brodsky (Dityatkovsky) on the deck of a luxury liner, reviewing all his life from the early war years when his Navy photographer father (Yursky) was serving in the Far East, while Brodsky accompanied his Red Army translator mother (Freindlich) to various prison camps across the country.

Some of the most touching moments in the film cover his childhood, painting an intimate, cheerful, closely knit family, that never lets their cramped living space or the penury of the lean years sap their spirit. The film freely elaborates on young Brodsky’s flights of imagination at the time, including a magical animated sequence in which Soviet soldiers throw culture out of the window, followed by a whole orchestra’s worth of instruments.

Though showered with every available honour once he reached America, his Russian soul remained intact. In one scene, he phones home to ask his mother the lyrics of an old song and after she begins to hum the melody soon both all her neighbours join in along with Brodsky and his Russian emigrant friends at the other end of the line. It’s a poignant reminder of the strength of shared national identity despite political and geographical obstacles.

The script, inspired by Brodsky’s own autobiographical essays, is witty, charming and has more than a pinch of pathos. It is also splendidly acted by the whole cast with Freindlich and Yursky delivering scene-stealing, perfectly pitched performances as Brodsky’s parents.

Briskly cut, the film has a collage soundtrack of Brodsky’s own reading of his poetry alongside a vast choice of musical excerpts from classical to old Russian tangos. Art and literary quotations dominate, a reminder of Brodsky’s theory that his was the last generation to really appreciate culture.