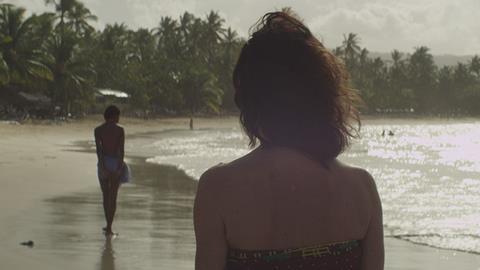 Imagine a single-sex version of Ulrich Seidl’s Paradise: Love, directed with compassion and transposed to the Dominican Republic, and you’re getting close to the spirit of this delicate, honest tale of the relationship between a French grandmother – played with slow-burn passion and commitment by Geraldine Chaplin – and a young Dominican girl. A little swamped on its debut in the lucky dip of Toronto, the film has resurfaced in the ‘Cinema of Today’ section at the Rome Film Festival.

It’s a film with a restless motion, a film about people in transit (on motorbikes, on foot, in life), in which the question of whether to stay or whether to go, and if so where, takes on a special, existential resonance.

It’s a film which deserves greater exposure – something that will no doubt come, at first, through further festival play. But Sand Dollars (Dolares de Arena) has enough audience appeal to work theatrically beyond the micro-markets reached by the directing duo’s last feature, immigration docu-drama Jean Gentil.

The wife and husband directing team set the scene with an admirable economy of means. Five or six cuts in, after just a few lines of dialogue, we already know that svelte young Noeli (Mojica) with her insouciant face and her hoop earrings makes a living by befriending rich foreigners in an upscale Dominican beach resort (actually Las Terrenas). We know too, as soon as he helps her sell a necklace given to her by a perma-tanned Italian client, that her boyfriend (Toribio) is happy to live off her earnings.

But Noeli’s main client is female, not male – Anne (Chaplin), a solitary, ageing Frenchwoman who lives in a beachcomber-chic cottage by the sea (part of a hotel, we later discover). She seems to need the young girl as much for companionship as for sex, and has a plan to take her back to France with her. They do simple things together – swim, talk, walk on the beach, and lie with bodies entwined, Noeli’s smooth black skin contrasting with Anne’s wrinkled whiteness, the latter only enhanced by her badly-applied, permanently smudged eyeliner. The boyfriend – a gentle enough guy of Noeli’s own age with whom she seems to be more or less in love – is there in the background, wary, jealous but also conflicted by his need for the money Noeli brings home.

From a single phone call and the visit of an old American friend, Tom, we learn that Anne has grandchildren and an estranged son back in Paris – but we never discover why they fell out. In the world of the film, the plot device serves to make Anne a willing prisoner of this tropical limbo – in a place she loves but doesn’t belong to, with a girl she loves but who doesn’t quite belong to her. Colonialism seems to have given way to a system where ageing European visitors or residents allow themselves to be fleeced in return for a warmth and naturalness that is missing where they have come from; and in order to feel young again, to feed on youth.

There’s a point, after Noeli is mugged one night and disappears for a while like a wounded animal, when Anne seems to have lost her girlfriend; and she’s devastated. Later, when the two are back together and soon to depart for France, it’s the boyfriend’s turn to feel abandoned. The story will resolve itself in a surprising way that yet feels entirely believable.

The lyrical, mostly handheld photography, peppered with poetic insets (roaring breakers, horses on the lawn, a few key music and dance scenes), shifts the focus away from the problems of three little people. It’s a film with a restless motion, a film about people in transit (on motorbikes, on foot, in life), in which the question of whether to stay or whether to go, and if so where, takes on a special, existential resonance.