Romanian director talks to Screen about his debut feature, which screened in competition at Sarajevo Film Festival. 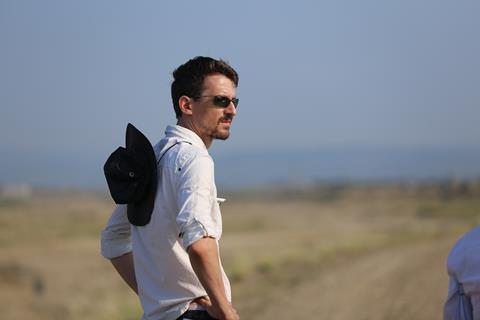 Romanian writer-director Bogdan Mirică’s Dogs world premiered in Cannes’ Un Certain Regard, where it won the FIPRESCI Prize. Developed through Sarajevo’s co-production market CineLink, it has now returned to play in the festival’s competition.

Mirică studied journalism and worked in advertising, before getting an MA in screenwriting at the University of Westminster in London. He went home to Romania and started writing screenplays, penning eight scripts for feature films and TV series - all of them comedies - before he decided to direct his first feature.

“After a while I got very frustrated by how I worked with directors,” Mirică recalls.”When you’re at the beginning and have not studied film, you are terrified by these technical things: the lighting, how to use the lens, how to know when to use a tracking shot and when a handheld camera, and so on.

“But then I realized this is the easiest thing in the world once you know the story you want to tell.”

In Dogs you play with different genres, most obviously with thriller and Western.

I really love thrillers, but those that they used to make in the 70s, not what they’re making now. For me a thriller is something that plays with expectations, that makes you anticipate, but you never quite get there, something that really frustrates you. Today a thriller is something that has a premise and then in 20 minutes they already give you clues. And this is what I wanted to play with. I wanted to play with ellipses, with audiences’ minds in the way that they try to second-guess what I’m going to do and then just turn that around.

I don’t know that many Western movies, I didn’t try to quote and emulate them. I wanted to be as organic as possible, and when I decided on the shots with the DP [Andrei Butică], I had in mind only what I wanted to shoot, not the entire film history.

I never understood who said that you can’t play with a lot of genres. There’s this unwritten rule, but since I didn’t go to film school, I can’t really obey that rule. I just tried to make a movie that I would enjoy watching. And if that meant that at times it’s a comedy, and at times it’s a thriller or a western, or noir, or it has a bit of social realism, that’s OK with me. That’s what I love about South Korean movies, like Yellow Sea or The Host. They are so free in approach to genre.

Where did you start from with the story and directing approach?

Several things came together at the same time. The atmosphere of the film is inspired by my memories. When I was a kid I used to spend summer holidays at my grandmother’s in the countryside. It’s a bad place. For instance, at night I would see a lot of locals coming out of the pub, and they are drunk and they start to fight, with axes and baseball bats, and the scary thing was that there was no stake. They were not fighting for anything, it was just a way they communicated. They wouldn’t have a problem stabbing you if they thought that’s what they should do. So there were a lot of teenagers who were in jail at one point or another. This is what inspired me. It was so scary, but at the same time I was so fascinated, because you don’t really see that in the city. You find this only in small, secluded places where people develop a certain kind of approach towards life and their peers.

It is never explained what the bad guys are actually doing.

This was a challenge I set myself on taking: can you create a very believable bad guy without knowing what he does? When you see a bad guy in a movie, you usually seeing him killing people, or dealing drugs, and so on. So I thought, what if I keep it very abstract? Can I make him believable? This was my challenge. Can I create this character who is evil, who will go to any extent to protect his business, without knowing what the business is?

This certainly depended a lot on the actor, Vlad Ivanov. How did you pick the cast?

The main trait I was looking for was a certain physicality. Usually actors in Romania look like intellectuals, and you can’t have someone like this playing somebody who’s supposed to leave the impression as if he is emerging from the earth. And Vlad Ivanov has this quality. When he enters the room, he really occupies that space. He is the most amazing actor I ever worked with.

And Dragoş Bucurtoo. He looks almost like a bouncer. He has this evil eye, and you can totally see that he is extremely stubborn and arrogant. He thinks, “I come from the city. I look the way I look. This is my land.” You can really see that he is going to end up badly, because he’s so sure of himself.

I knew Gheorhe Visu from old movies, but when I met him, he was so fat. So we hired a nutritionist and he lost 27 kilograms in three months. I wanted him and Ivanov to just sit next to each other and that the audience feels what these two characters feel for each other, how they despise each other and hate each other, without too much acting.

Are you working on any new projects?

At the moment I’m doing a TV series for HBO Europe, it’s an urban gangster story called Shadows. We are now in pre-production for the second season, and I’m very excited about it. It’s interesting because it’s totally different to Dogs, we shoot with five cameras, it’s all very fast and raw and gritty. This is one of the reasons I did Dogs the way I did it. I wanted it to be totally different.