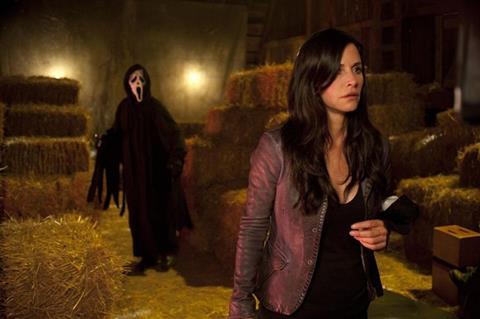 Coming more than a decade since the last franchise entry, Scream 4 again mixes murder, mystery and self-awareness, to adequate if not exceptional effect. A meta horror entry which reteams writer Kevin Williamson and director Wes Craven, the film introduces a fresh crop of victims and suspects, blending them together with old characters and past grudges, and succeeds on its own carefully prescribed terms as a piece of diversionary puzzlebox entertainment, but doesn’t pack the wallop of the best moments of its forebears.

Scream 4 doesn’t really strongly attempt to echo or comment upon the plot turns of any recent horror franchises.

The first three Scream movies were remarkably consistent performers, each earning between $160-173 million in theaters, with roughly 45 percent of that haul coming from overseas. Mixed critical response seems unlikely to damage box office prospects and throw it off the course of nine-figure returns. With its blend of scares and tension-deflating laughs, Scream 4 should succeed in both bringing series fans back into the fold while also attracting a new generation who only discovered the original films on DVD.

Years after the traumatic events of her past, tangled up in a web of multiple murders, Sidney Prescott (Neve Campbell) has finally achieved a measure of peace, and turned her terrible experiences into the basis for a self-help book. When she returns to her tiny hometown of Woodsboro on the last stop in her book tour, she reconnects with Sheriff Dewey Riley (David Arquette) and tabloid-reporter-turned-novelist Gale Weathers (Courteney Cox), who are now married.

Unfortunately, Sidney’s arrival also elicits the return of a costume-clad, knife-wielding Ghostface, who again heralds his acts of violence by first terrorising her, and others, over the phone. Soon Sidney’s cousin Jill (Emma Roberts) finds herself in the killer’s crosshairs, along with her boyfriend Trevor (Nico Tortorella), her best friend Kirby (Hayden Panettiere), and two A/V club geeks, Robbie (Erik Knudsen) and Charlie (Rory Culkin), who use webcams to live-stream their entire high school experience.

For all of the original film’s referential genre bits, from Psycho to Halloween, Scream 4 doesn’t really strongly attempt to echo or comment upon the plot turns of any recent horror franchises, like Saw or Paranormal Activity, instead investing more generically in advances in technology and social media over the last decade.

It’s undeniable that Scream 4, despite some grim and bloody set pieces and squirm-inducing stalking from Ghostface, doesn’t really work or hold together, in the conventional sense, as a scary movie. Audiences need not have seen the earlier films recently, but must have some sort of trace memory and rooting investment in the shared plight of the older characters. Apart from a multi-layered genre deconstruction that opens the film, Scream 4 is thematically most similar to the original 1996 movie, in much the same way that Rocky and 2006’s Rocky Balboa could be viewed as satisfying bookends, divorced from the rest of the series.

While a hallmark of Scream franchise has been its nimbleness and narrative cleverness, there here seems a missed opportunity to delve deeper into notions of celebrity victimhood, and the strange complicity of the town of Woodsboro, for which the apparently annual marking of the murders remains a bizarre sort of cottage industry. The reasoning and motivations behind this most recent set of murders come tumbling awkwardly forth in the last act, but since they are deployed chiefly in the service of twists, their exploration thus comes across as a bit disappointingly shallow.

Working again with cinematographer Peter Deming, series helmer Craven frames much the violence in widescreen, which runs counter to the gory close-ups of a certain subset of horror films.

Given both the perfunctory nature of large chunks of dialogue and the large degree to which Scream 4 is a type of cinematic exercise in pulled levers, there is not much opportunity for performers to shine, though Roberts and Brie make the most notable impacts amongst the newcomers.