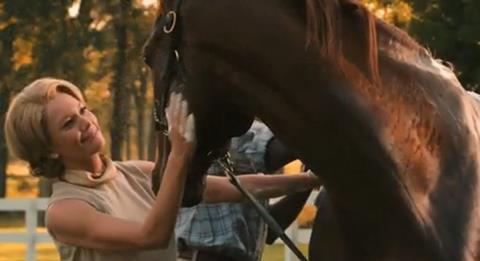 With films like Remember the Titans, The Rookie, Miracle, Invincible and The Greatest Game Every Played, Disney has not just revitalised but almost entirely owned the truth-based inspirational sports drama subgenre in recent years, with smash hit The Blind Side being a notable exception. Secretariat follows in these well-worn grooves, detailing in earnest and narratively conventional fashion the story of the same-named 1973 Triple Crown-winning racehorse. After two hours, it’s a credit to those involved that one leaves feeling a horse’s intangible competitive spirit merits such an examination.

Directed by Randall Wallace, Secretariat tells the story of its big, prizewinning chestnut horse mostly through the eyes and experiences of owner Penny Chenery (Diane Lane), who, in the wake of her father’s death, transitions from housewife and mother to driven taskmaster. Not knowing the particulars of the sport, she hires Lucien Laurin (John Malkovich), a colorful French Canadian trainer who dresses like Superfly, to oversee her promising colt. In fairly straightforward fashion, the film then charts Secretariat’s training and come-from-behind runs through the Kentucky Derby and Preakness Stakes, culminating in his record-smashing Belmont Stakes performance.

Screenwriter Mike Rich has specialised in (mostly true) stories of plucky uplift, and his experiential instincts lead him in the direction of bromides and lots of on-the-nose speechifying, the sort of which prevent Secretariat from ever evolving into something truly special. Rich is more successful injecting a strong feminist streak into the movie, abetted by Lane’s convincingness in jointly portraying affection, ambition and principled stubbornness.

If the drama of its last hour-plus seems predetermined, Secretariat consistently and pleasantly holds one’s attention, albeit more lightly than grippingly. Wallace pulls all the emotive levers rather effectively, aided by a slick technical team.

Particularly superb is Dean Semler’s cinematography, which entertainingly incorporates mounted cameras in the movie’s invigorating race segments, thus giving a whole new sense and perspective of the word “horsepower” for those who’ve never heard the phrase used outside of automobile and truck commercials.

Though beset with slightly unnerving blue contact lenses, Lane is the movie’s anchor. Malkovich, meanwhile, is a hoot as loose cannon Lucien. While RED is getting marketing mileage out of the actor’s supporting-player lunacy, Secretariat is his true scene-stealing movie of October.

Screenplay: Mike Rich, suggested by Secretariat: The Making of a Champion, by William Nack