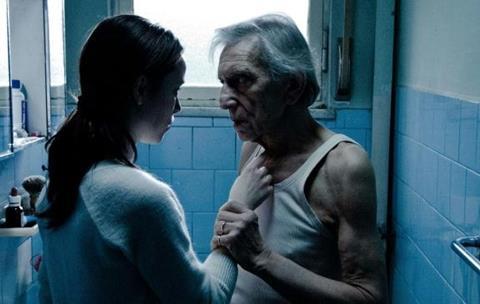 The first feature by twin brothers Massimiliano and Gianluca di Serio, after a series of documentaries and video installations, is a tough proposition at the best of times. A bleak, grim portrait tracing the desperate efforts of a young Romanian girl to gain some kind of legitimate status in Italy, this is the kind of film that festivals may well appreciate for its uncompromisingly gloomy, stylish approach but quite a few critics will balk at what they will interpret as sanctimonious Christian righteousness.

Shot in Turin on locations the di Serio brothers are very familiar with, moving at the slow, deliberate pace of a morality lesson.

As the title already indicates, the Christian spirit hovers over Seven Acts Of Mercy (Sette Opere di  Misericordia), and if the seven acts recommended by the Holy Church (“feed the hungry”, “give drinks to the thirsty”, “clothe the naked”, “shelter the homeless”, “visit the sick”, “visit prisoners” and “bury the dead”) seem to reflect ironically on the proceedings, by the end of the film, you can find illumination and final catharsis is the most pious sense of the word.

The di Serio siblings’ script arranges for a meeting between two persons who have had - not out of their own choice - to renounce dignity altogether. Luminita (Olimpia Melinte), an illegal immigrant, young, raw and terrorised, sleeps in the back of a car in one of Turin’s infamous slums, picks pockets and purses in a hospital for a living and there is nothing she will not do for a piece of paper establishing a legal identity. Antonio (veteran Italian actor Robert Herlitzka) may have his own flat, but he is old, frail, deprived by age and disease of any dignity he might have had, always dependent on others for the not very simple act of survival.

The encounter between these two characters, both immersed in their own private miseries, will bestow on each one of them a touch of human grace they badly need for the peace of their souls.

The script has Luminita in a state of rage and despair all through the first part of the film. She is the vile aggressor, but changes suddenly when her plans are foiled.  Antonio, whose physical impotence crushes any resistance he might put up, is far more assertive in the second part, his helplessness being part of his strength.

The switch in their relationship, which should be, from a narrative perspective, the key to the entire plot, is not terribly convincing or sufficiently elaborated, but it finally leads each one of the two characters to his or her (in the girl’s case after due penance) absolution reached through the other and thus rounding up the religious sense of the entire parable. There is of course an additional option of reading the film as yet another, more conventional but pretty fierce metaphor on East European immigration invading the West.

Shot in Turin on locations the di Serio brothers are very familiar with, moving at the slow, deliberate pace of a morality lesson and using a gritty type of almost documentary visual style to enforce the kind of background of the leading two characters, the entire film relies on its two lead performers, who seem to be typecast for their parts.

Olimpia Melinte’s scowl, part anguish, part fear and all frustration, softens gradually to a beautifully lighted, almost iconic image, the moment she heads back to take the punishment she deserves, while the tortured expression of a man whose body has given up on him, spread all over Herlitzka’s face, changes at that point into something akin to bliss.