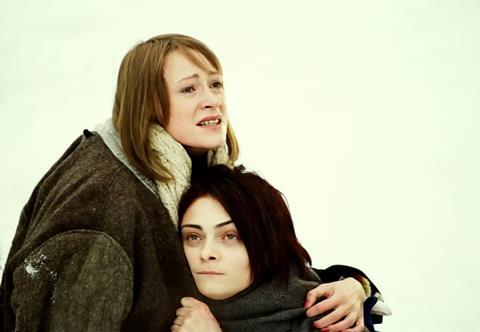 Embroidered around the real tragedy of the Russian submarine Kursk, sunk to the bottom of the sea in August 2000 with all its 118 sailors on board, Yusup Razykov’s film Shame (Styd) tackles the familiar theme of women waiting patiently at home for their men to return after long absences, for whatever reason they are being kept away, without knowing what is happening to them or whether they will ever be seen again.

Loosely tied up together and relying mostly on the striking visuals provided by Yuri Mikhailyshin’s camerawork.

Set in the frozen Kola peninsula, well inside the Arctic Circle, in the midst of glacial winter, with a snow-covered, desolate landscape surrounding the drab, ugly, depressing military settlement, forgotten, neglected and falling apart, Razykov’s film adds a second string to its bow, the personal crisis of one woman who refuse to be like all the others, entirely dependent on the man in her life, while at the same time being haunted by her own past.

Lena (Maria Semenova) is the new wife of an officer out at sea on a secret mission. Wearing an elegant, tailored blue coat which tells her apart from all the rest, driving back and forth in a red Fiat acquired with the inheritance left by her recently deceased mother, she will not strike friendships with any of the others, refrains from their social occupations, has an affair with the captain of a fishing boat, and defies any attempted familiarity from those who share her fate.

Around her, the other women pretend, not very successfully, to be in complete denial of their situation, claim that nothing wrong could happen to their husbands while fearing the worst. But the impending disaster is not to be prevented, and the belated announcement made by the military authorities (a hint to the failure of the Russian Army to rescue the Kursk and their refusal to accept any assistance from the West) adds insult to the injury done to these women.

At this point, however, Razykov and his script writer Ekaterina Mavromatis, pick up the other thread of their plot, which was left dormant after an intriguing opening sequence. Lena, packing to go back to St. Petersburg, finds old love letters addressed to her late husband, goes out to look for the woman who wrote them, revealing in the process her own emotional hang-ups resulting from the four years she had to treat her ailing mother. Though it is possible to draw a sort of connection between the two plots, ultimately they seem to weaken rather than support each other, detracting from the impact they should have had.

Loosely tied up together and relying mostly on the striking visuals provided by Yuri Mikhailyshin’s camerawork, Razykov’s direction - stronger on atmosphere than it is on plot - respectably follows familiar paths, delivering a thoughtful but not particularly gripping drama, predictable in the first part and insufficiently developed in the second one. To his credit he put together a solid cast, particularly Maria Semenova whose remarkable performance is enhanced by her hard-lined profile, almost like carved in stone, until it breaks down at the end.

Finally, whoever picks this film for the distribution might consider changing its English title, already frayed at the edges from too much use and having nothing in common with the Ingmar Bergman or Steve McQueen films.