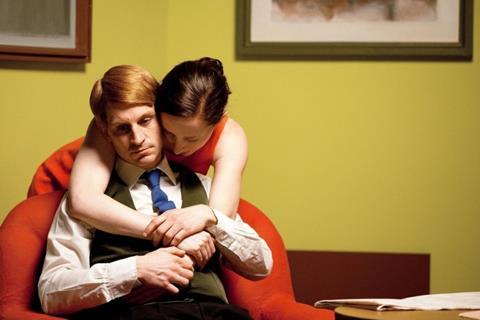 A potentially fascinating cinematic experiment – theattempt to bring to life 13 of Edward Hopper’s iconic paintingsand provide a storyline that links them – makes for arather chilly and over-earnest viewing experience in videoartist Gustav Deutsch’s latest ‘feature’ – if a workdestined as much for the gallery as the theatrical screen can begiven that name.

In choosing as his springboard an artist who was influenced by and influenced the world of cinema, Deutsch is mining a rich seam; it’s a shame that the story he threads his ravishing tableaux onto is so much less engaging than the film’s visuals – which consist of eerie, spot-on filmic reproductions of the selected canvases.

The result is a film that suffers from the opposite problem from, say, Peter Greenaway’s dramatisation of a Rembrandt canvas in Nightwatch: excessive caution rather than excessive artistic licence. Further festival action, modern-art-museum showings and perhaps the occasional arthouse one-nighter look to be Shirley’s main chance of getting out of the house.

She’s an actress, we learn, with various avant-garde theatre groups (in the course of the film she will mention working with both Elia Kazan and Julian Beck’s Living Theatre); her husband – seen in only two scenes – is a photo-journalist. The ineffable melancholy of life seems to consume Shirley’s soul, and she lives it as she speaks, in a bored New England drawl.

There’s a didactic ‘I did my homework’ quality to some of the script’s presentation of film references (Scarface, The Long Absence), US theatre history, literature, philosophy and other background material. This said, the visual sheen and the rich soundscape of the tableaux created by Deutsch is captivating, and for the first few scenes we’re held by the bravura collaboration of cinematography, CGI colour and texture effects and production design (it’s no surprise to discover that the director himself handled the latter, so integral is it to the overall effect).

Though there are a few close-ups and in one giddy moment, even a fast pan, the default mode is to frame what is framed in Hopper’s canvas in a single fixed shot. And though anachronistically modern, the sparingly applied ethereal musical soundtrack by Christian Fennesz and David Sylvian works well in this slightly airless world.

You could argue that with this film Deutsch is empowering the silent, lonely women in Hopper’s masculine American landscapes and cityscapes. But many would say that Hopper was doing that in the first place – and that this film adds very little, except technical wizardry, to a great artistic legacy.