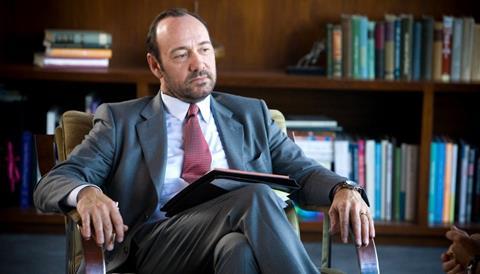 A splintered look at the Hollywood dream factory through the perspective of Kevin Spacey’s quickly-unraveling Los Angeles therapist, Jonas Pate’s Shrink is more forgiving and humanistic than acid-tongued, more Entourage than The Player.

Thomas Moffett’s script deals with familiar material - social ambition, personal destruction and the quest for redemption - and while it is sometimes less than convincing, sequences between Spacey’s counselor and a teenage African-American girl (Keke Palmer) have a poignancy and depth of feeling which compensates for the movie’s more awkwardly-staged moments.

The talented and eclectic cast (including an unbilled Robin Williams playing a philandering actor) ought to provide some domestic exposure in urban markets and ancillary formats and limited international arthouse play.

Henry Carter (Spacey) is a popular psychiatrist still reeling from the suicide of his wife. Existing in a near permanent state of pot-induced torpor, Carter uses the collective guilt over his wife’s death to hold off an intervention orchestrated by his father (Loggia). His media profile ensures his lucrative practice carries on and he has a powerful personal hold on the movie industry’s elite including a hyper-aggressive, obsessive-compulsive agent (Roberts); a beautiful though aging star (Burrows); and a self-destructive Irish heartthrob (Huston).

The more compelling material and the emotional heart of the movie lies with the movie’s two young outsiders: Jeremy (Webber), an aspiring screenwriter and family friend of the Carter and Jemma (Palmer), an attractive, smart schoolgirl who’s desperately struggling to cope with the loss of her mother.

The multi-layered plot suffers from a distinctly uneven tone, however, and overall the material doesn’t feel fresh or spontaneous. Some of the secondary strands, such as a starlet (Ramsey) who uses her sexuality to rise to the top, feel arbitrarily woven into the larger story. Shrink also has some strident scenes that simply do not work, such Spacey’s meltdown on a television program with author Gore Vidal. Fortunately, every time the work seems set to go off track, the young adults with their probing, quiet intensity ground the movie in a more spirited, quieter and contemplative mood.

Thomas Moffett, from a story by Henry Rearden