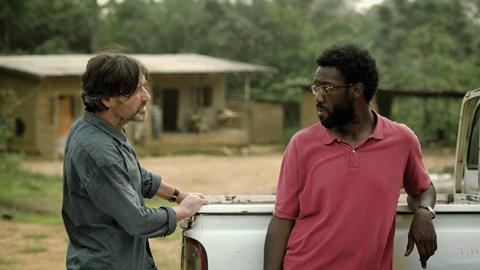 Politically correct to a fault and dramatically limp all through, Ulrich Koehler’s Sleeping Sickness (Schlafkrankeit) may well generate lots of intellectual observations on the role of Western aid in Africa but will not raise the pulse of an audience even for one second.

None of Koehler’s characters exudes any kind of distinct personality or shows any real determination to achieve their goals.

A folllower of the passivity school which seems to be popular among German art-house directors, Koehler’s picture deals with familiar and well-explored themes, but the apathetic congregation of characters he uses in order to put his ideas across, requires no real effort from the cast and expects no real identification from the spectator. Though festivals may well be attracted by the political relevance of the subject, the market options are pretty slim and rest mostly with television.

Eddo Velten (Pierre Bokma) has been managing a sleeping sickness programme in Cameroon for many years, but his wife Vera (Jenny Schily) decides to go back to the small town in Germany where they came from. Eddo realises that it may be his time to return as well, but finally gives in to the temptation and decides to stay on, continuing the scheme and joining forces with a Frenchman, Gaspard (Hippolyte Girardot) - a typical European vulture prying on Africa’s natural resources - who intends to start his own plantation and needs Velten to manage it.

Three years later, a Parisian-born African doctor, Alex Nzila (Jean-Christophe Folly) is dispatched to evaluate the sleeping sickness programme, which benefits from considerable funds for the European community, and discovers that the supposed epidemic has been under control for years and there is no reason to pursue it when help is needed elsewhere.

Koehler, who was born in Africa and spent his childhood there, is obviously familiar with the territory and with the issues. He started the film after visiting his parents, who are still living there, shooting most of the picture in the hospital where they were both working. This may explain the feeling for the lay of the land which looks authentic and avoids pretty picture postcards clichés.

There is no argument with his description of local corruption, chaos and anarchy, or with Westerners being sucked into it, even when they start with the best intentions. If their presence requires giving up the comforts of modern life, they are offered compensations that many of them are not willing to give up, whether it is a position of authority, a houseful of obedient servants, and so on. Not that much different from the old colonial dream.

The problem is, however, that none of Koehler’s characters exudes any kind of distinct personality or shows any real determination to achieve their goals. Even Gaspard, an unscrupulous profiteer who should be out for a quick buck, doesn’t seem to be in any particular hurry to finish building his plantation.

Bokma, whose character is supposed to realise that he has betrayed his African dream and lost his European identity, is expected to carry most of the film on his shoulders but seems to be far too exhausted for the job while the rest of the cast never gets sufficient screen time to develop a real character.
Finally, if it is true that Western paternalism has failed Africa in the past and continues to do so in the present, there are surely more exciting ways of putting this statement on film.