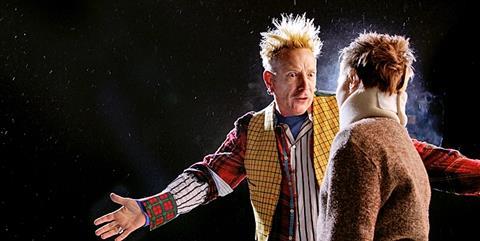 The anarchic ethos of the punk era is championed in Sons Of Norway, a bittersweet coming of age drama based on the ” mendacious autobiography” of Nikolaj Frobenius. The story of a 13 year-old boy coping with the death of his mother and the failings of his liberal father in late 1970s Norway balances wry laughs with darker undertones to create a likable film with the potential to become a crowdpleaser in Scandinavian territories.

John Lydon (aka Johnny Rotten) was executive producer of the film and has a fleeting and typically eccentric cameo offering words of wisdom to his young acolyte.

The brash exterior conceals a fairly conventional, soft-centred interior but there are enough quirks and emotional hooks on display to endear this to audiences who have embraced similar fare like Fucking Amal or C.R.A.Z.Y. Further Festival screenings and some theatrical interest seem assured.

The latest feature from The Bothersome Man director Jens Lien mostly focuses on the ebb and flow of the ties that bind 13 year-old Nikolaj (Asmund Hoeg) to his hippie father Magnus (Sven Nordin). Magnus is an idealistic architect who has moved the family into Rykkinn, an experimental housing scheme built on the belief that everyone can live in perfect harmony.

When his mother is killed in an accident, Nikolaj is faced with a father who would rather be his friend than a parent. A blast of The Sex Pistols music inspires Nikolaj to cut his hair, insert a safety pin through his cheek and embrace the values of a punk. He seems to be craving his father’s disapproval but Magnus supports his choice and wants to come along for the ride.

Sons Of Norway (Sonner Av Norge) mines a rich vein of humour from the way parents can embarrass their offspring. The eternally game, well-meaning Magnus drags a mortified Nikolaj to a naturist retreat and even volunteers to play in his punk band when the drummer is indisposed. It becomes increasingly impossible for Nikolaj to assert himself as a rebel when there is nothing to rebel against.

Attempts to draw wider lessons from the experiment of Rykkinn are kept to the sidelines in a film whose compact running time leads to a certain sketchiness and lack of space for some of the weightier emotional issues to develop depth. The two central performances are perfectly balanced with Sven Nordin the shaggy embodiment of hippie benevolence as a father who knows no shame.

The watchful eyes of Asmund Hoeg convey the real grief and pain that Nikolaj is forced to endure beneath his growing frustration. The Sex Pistols music provides much of the soundtrack to the story; John Lydon (aka Johnny Rotten) was executive producer of the film and has a fleeting and typically eccentric cameo offering words of wisdom to his young acolyte.