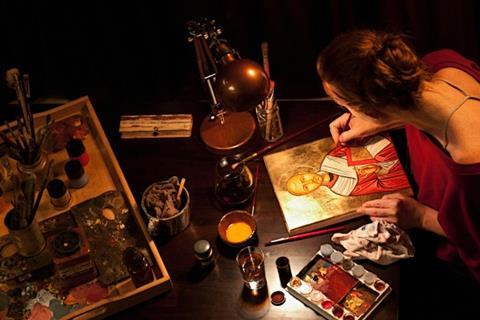 A cast of kooky loners led by Gregoire Colin disappear into a big multi-linear black hole in Austrian director Anja Salmoniwitz’s debut, which centres, in an unfocused sort of way, on immigration issues. Visually stylised, larded with Biblical imagery and ultimately rather cold, the film holds our attention at first as we struggle to work out in what way the four oddball characters it focuses on are connected and where the story is going with them.  But as the unlikely twists and gnomic lines of dialogue pile up, it’s difficult not to let the irritation creep in – something not helped by the fact that two of the four characters are losers with few redeeming qualities.

The film’s heightened autumnal palette, obtrusively quirky production design and superficially hip multi-strand storyline could conceivably talk some audiences round, but without the backbone of satisfying dramatic structure or characters that feel real, these are meagre compensations. Colin has a certain cachet, especially among female viewers, but this is unlikely to be enough to steer Spain towards much theatrical action outside of Austria and Germany.

In the great tradition of arthouse films that have little to do with the place they’re named after, Spain opens with a crash between a car and van on a country road in what turns out to be lower Austria. Though both drivers die, Sava (Colin) emerges unscathed from a crate in the back of the van. Initially assuming he’s in Spain (it later emerges that he had paid the van driver to take him to Barcelona) the taciturn Moldovan is given board and lodging by the priest whose moped he had fixed. He turns out to be a dab hand too at evaluating antiques and restoring wooden statues – a dilapidated group of which are soon keeping him busy in the priest’s country church.

The film’s other main character is Magdalena (Alexander), a quiet, well-dressed woman who picks men up on the street and takes them home. The jealous, pugnacious ex who lurks outside her apartment turns out to be her estranged husband Albert (Obonya), who works as an immigration cop, his main remit being to unmask marriages of convenience between illegals and Austrian women. It later transpires that Magdalena is an icon painter and restorer of church frescoes (an unusual combo in real life, but never mind), and she only takes the strangers home so she can sketch them. A third plot strand focuses on Garbriel, a crane operator with a bad addiction to slot machines, who slides inexorably into the slough of despond.

The plotlines of all four characters are interleaved in a way that apes the structure of a film like Babel or Crash to little real purpose, as few sidelights are shed between one story and the next. The Gabriel strand, in particular, feels grafted on here from another film, and a final-act revelation does little to reclaim it. And the film’s religious imagery – which ranges from the characters’ names to heavy-handed symbols of feet-washing, loaves and fishes, crucifixes – is very much of the ‘put it in and see what sticks’ variety.

Just occasionally this over-artful film hits its stride, and the uneasy tone, poised just on the dramatic side of black comedy, is well maintained. But it’s perhaps no accident that in such a relentlessly quirky film with its relentlessly over-written characters, the most affecting character (Gabriel’s sweet, unsuspecting wife) is also the most normal.