The village of Juzcar has been given new life thanks to Sony’s Smurfs and a lick of blue pain so news of a sequel brought camera crews back to the area along with a famous footballer. 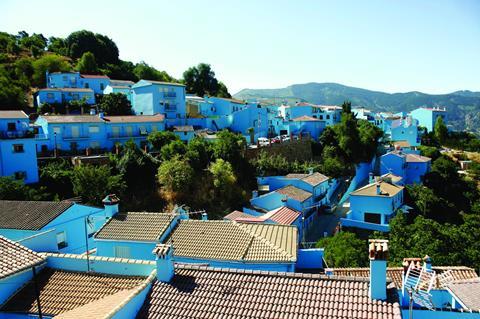 There is a little town in inner Andalusia called Juzcar. In the middle of the wild and beautiful Serranía de Ronda, the mountains that surround this typical Spanish beach village, Juzcar had major unemployment.

“This is the most hidden village of the Serranía”, says a bus driver who travels from Ronda to the area several times a day. “Tourists just visited more accessible places and never arrived here”. The local bar, says the bus driver, was a very small business only for locals. Today it is full of people due in no small part to that fact that all the houses but one of this village of 400 people are painted in blue.

Self-baptised as “the world’s first Smurf town” it could be seen as a corporate fairy tale. Back in 2011, Sony proposed transforming Júzcar into a Smurf town for a couple of months to promote of the release of Raja Gosnell’s film based around the pint-sized blue characters.

All the houses were painted blue by the company and major big promotional event was held in the village to promote the film’s opening in Spain, where the Smurfs are highly popular. Sony had promised to repaint the houses to their original colour – but, that summer, visitors to Júzcar were up 200,000 on the previous year and local economy boomed.

Two years later, Júzcar is preparing for another boost as the sequel to the Smurfs opens in Spain on August 2 and Sony are back on town, along with international superstar football player Andrés Iniesta and Spanish model Eva González.

The sight of Iniesta being cheered by the whole village in the main square (with a church painted, of course, in blue and a big Smurfette statue at the door) is quite impressive. When he finishes his brief speech - basically a salutation for the locals - he has to abandon the place surrounded by no fewer than 15 police officers to protect him from public hysteria.

Shortly before, in the middle of the Serranía, Sony patronized the reforestation of the mountains.  Iniesta also made a brief speech in which he called for natural conservation, “a question that we all have to support”. He was wearing a Smurf T-shirt and was cheered by local kids, who had their photo opportunity with him.

Iniesta planted the first new plant of the mountain, as I did with a stake bearing the Screen name.

The CEO of Sony Spain, Iván Losada, also spoke about the commitment of Sony with Juzcar and their people while the major said he was proud of being the first Smurf town in the world, recalling the improvements the village has experienced since then.

There is only one person in Juzcar who is not happy with the “Smurfness” of the town and refused to have his house painted – and is therefore known locally as Gargamel [the villain in the Smurfs].

Full of souvenir stores and busy parents with children (their faces painted blue), Juzcar has been revitalised. That night, national news dedicated a slot for the Iniesta event.

But a young boy, who clearly enjoyed the event, tells me it is not all rosy. “This used to be a quiet place and now is crowded all the time. Sometimes it’s annoying”.

However, for Juzcar and Sony’s marketing department, the “Smurfing” of the village has changed lives and brought the area back to life.