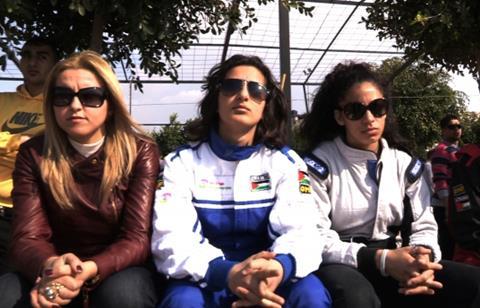 An engaging high-octane documentary that delves into both the problems facing Palestinians and the struggle for women to be accepted in a profession not normally associated with them, Amber Fares’ debut feature Speed Sisters is a savvy and at times nicely spikey film about the first all-women rally team in the Middle East.

The film, which had its world premiere as opening night of the second annual Ajyal Youth Film Festival in Doha, Qatar, is an accessible and illuminating account of how five young women (four drivers and their forthright manager) take on the Palestinian Motor Sports world on their own terms.

Set against a backdrop of a country facing restrictions on movement with military occupation naturally presenting issues a-plenty, Speed Sisters tackles the political and practical issues but never makes them the focus of the story – instead it is about the women, their lives, skills, and their passion for screeching doughnuts and the need for speed that defines the film.

Competitive car racing started in Palestine only in 2005, but the Palestine Racing Federation owns no land and operates its events in empty lots, and while drivers practice their skills anywhere they can find space the women drivers - Marah Zahalka, Noor Daoud, Betty Saadeh and Mona Ennab (overseen by manager Maysoon Jayyusi) – hone their skills in a patch of land close to an Israeli detention centre.

The four determined drivers are all very different personalities, all of whom feel they were born to drive, but who also have to face up to disappointment, criticism, pressures from society and arbitrary rulings. Marah is the most naturally talented driver, but suffers from lack of money, with her car built by her father and friends; Betty, who was born in Mexico, is aware that her blonde hair and looks help get sponsorship; Noor is a free-spirit who favours ‘going for it’ rather than planning things out, while accident-prone Mona races for the sheer love of it. Manager Maysoon bonds them all together, but love is in their air for her, with a move to Jordan on the cards.

The film nicely punctures stereotypes of women from the region, and while traditional in structure and form its has as its ‘stars’ a group of intriguing, smart, engaging and determined women. It juggles domestic issues (in terms of how their families view them) and practical ones (finding space to practice their speeding manoeuvres) though their story is always haunted by the spectre of existing under Israeli military occupation, which comes to a head in one jarring and striking scene as Betty is hit by a tear-gas grenade.

There is a sub-story about the competition – as they race in Jericho and other venues - between Marah and Betty to be top of the women’s circuit (though they race against the men, there is a separate trophy for best woman driver) and though there are hints at the tense state of the relationship between the two women, this is never really highlighted or dwelt on. Instead Speed Sisters celebrates the verve, skill and admirable sheer bull-headed determination of these talented drivers.