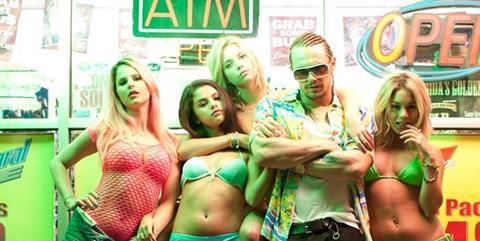 A day-glo, hip-hop drug rush of a film centring on a group of four high-school girlfriends who go on a hedonistic sex-n-substance-abuse ‘spring break’ in a Florida resort, Harmony Korine’s remarkable fifth feature is like nothing the US maverick has ever done – or anyone else, come to that. Greeted with rousing cheers at its Venice press premiere, the film will nevertheless irritate those who fail to see the rather innocent fairy-tale and dream of teen freedom glimmering beneath Korine’s apparent glorification of a world devoid of values and obsessed with misogynistic sex, binge-drinking, guns, empty fame and money.

Spring Breakers is visually ravishing – indeed, at times cinematographer Benoit Debie’s camerawork, done on a dizzying array of filmstocks and formats, with slow-motion used to good effect in certain sequences, brings Terrence Malick to mind (if you can imagine Malick remaking a Russ Meyer film, that is).

But though it has an ambivalent rapport with the trashy world it mirrors, Spring Breakers manages to extract a weird poetry, even a melancholy, from this new Lost Generation – at the same time that it bumps and grinds along with its hard-partying protagonists. Veined with comedy and a few frankly exhilarating bursts of violent, bad-girlz empowerment, and garnished with a driving electro-dance and hip-hop soundtrack, the film looks at times like a long, smutty, auteurish version of an MTV pop video – except with a dramatic arc.

Easily Korine’s most commercial film to date, Spring Breakers should notch up sales in several territories and become a cult number at home in the States, where the censors are unlikely to give it anything worse than an R rating. The fact that three of its drug-taking, girl-on-girl-action protagonists (Hudgens, Benson and Gomez) hail from squeaky-clean film and TV backgrounds, from High School Musical to the Disney Channel, is no coincidence: Korine has great fun besmirching the teen idols here, and they’re all clearly up for a little besmirchment.

One of the film’s strengths is its hip-hop structure and editing style, which conveys the mindset of its pleasure-oriented teen protagonists as well as any dialogue. The full-volume, in-your-face opening sequence – set at a Florida hotel beach party during one of the hard-partying ‘spring breaks’ that have become almost an obligation for more affluent US high-school students – is one of many that will be reprised throughout the film in a style that borrows from deejaying (lines of dialogue too are replayed as on a dance track).

After this intro, we’re transported to the drab small town where four girlfriends live. The first three, brazen Cotty (Korine’s wife Rachel) and double-act sex-kittens Candy and Britt (Vanessa Hughes and Ashley Benson) are more sexy chorusline than distinct characters at first; it’s serious, dark-haired, dark-eyed Faith (Selena Gomez) – who we see attending a Christian youth group – who is the one to watch, as the most cautious but also the most mature of the three, not to mention the only really rounded character.

Lacking the money to make it down south to Florida for a spring break, Cotty, Candy and Britt decide to rob a Chicken Shack armed with fake guns and hammers. The inventively shot heist goes without a hitch, and winning over Faith – whose Christian qualms never put up much of a fight – the four head down to Florida, where they change into the bikinis that will be their default garb for the rest of the film, and launch straight into the all-day, all-night drugs, sex and alcohol-fuelled party that we glimpsed in the opening sequence.

Ending up in jail after a police raid on the hotel, the four are bailed out by silver-toothed Alien (James Franco), a self-obsessed, bling-crazy white drug-dealer, DJ and all-round gangsta whose tough boy act scares off Faith enough to persuade her to take the bus back home. Oddly, the film is not the poorer for the loss of its one strong female character as its dreamlike style and dark fable tone gradually steer our interest towards the pair who at the start had seemed indistinguishable blonde nullities – Candy and Britt. But the standout performance comes from Franco, who exposes the bluff and vulnerability behind the gangsta act.

Spring Breakers is visually ravishing – indeed, at times cinematographer Benoit Debie’s camerawork, done on a dizzying array of filmstocks and formats, with slow-motion used to good effect in certain sequences, brings Terrence Malick to mind (if you can imagine Malick remaking a Russ Meyer film, that is). And the hi-NRG soundtrack barely lets up, in a film that is an exhilarating visual and aural assault. And you’ll never look at pink balaclavas again in quite the same way.