Spy Kids 4: All the Time in the World 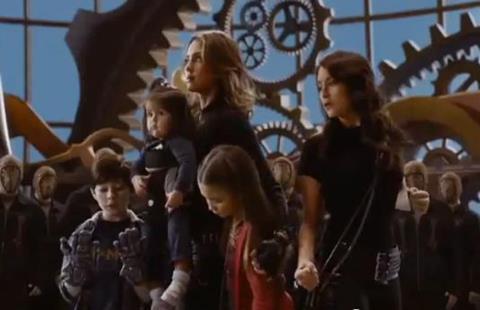 The fourth Spy Kids family adventure has a new cast led by Jessica Alba, slightly better production values than its predecessors and the gimmick of ‘Aroma-Scope.’ Mostly lacking, though, is the genuine sense of fun that originally informed the Robert Rodriguez franchise - whose previous entry was 2003’s Spy Kids 3D: Game Over - and turned it into a neat little earner for Dimension Films.

The film seems to be aimed at adults, with constant reminders about the importance of making time for family.

Opening simultaneously in the US, the UK and Russia in 2D and 3D versions, All the Time in the World probably won’t match the domestic take of the third installment ($111.8m) and may end up with the franchise’s smallest US tally yet. But it might do better in international markets, where the series has gradually grown in popularity and where the 3D version should be more of a draw.

Alba’s Marissa Cortez Wilson (sister to Antonio Banderas’ character in the first three films) is married to goofy TV reporter Wilbur (Joel McHale, from TV sitcom Community), stepmother to pre-teens Rebecca and Cecil (newcomers Rowan Blanchard and Mason Cook) and mother to her own newborn. None of the family knows that Marissa’s really a spy, so when she’s called to action to deal with maniacal villain Timekeeper (Entourage’s Jeremy Piven) life starts to get very complicated.

The story eventually draws in original title characters Carmen and Juni Cortez (again played by Alexa Vega and Daryl Sabara), who help Rebecca and Cecil mature into the next generation of Spy Kids, and a talking robot dog voiced by Ricky Gervais. Thematically, though, the film seems to be aimed at adults, with constant reminders about the importance of making time for family.

The 3D only comes into its own in a few action sequences and the scratch’n’sniff cards handed out to moviegoers (in the US at least) make bacon, blue cheese and farts smell pretty much the same.

Alba makes a fun lead, but the rest of the cast pales in comparison to the core of the first three films (Banderas, Vega, Sabara and Carla Gugino). Piven’s villain is not particularly despicable and Gervais’ sarcastic mutt just serves to add a few extra and rather lame jokes to each scene.