Director Richard Eyre tells Star of Tomorrow actor Charlotte Spencer about tempering performances for stage and screen, the perils of over-protective agents and how Emily Blunt set a benchmark for young actors. 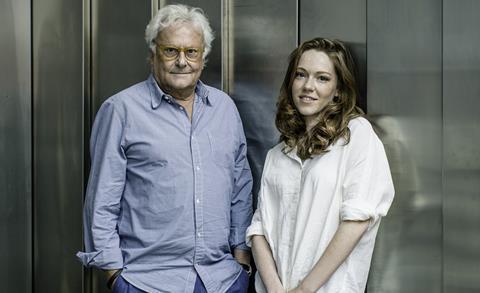 Charlotte Spencer: What are some of the qualities you recognize in a leading lady?

Richard Eyre: Well, I suppose they’d be the qualities that are in all actors I admire. And so I wouldn’t necessary categorise them as “leading ladies”. I look for, first of all, wit: wit in the sense of humour, wit in the sense of spirit, but also intelligence. They’ve got to be quick-witted. In the theatre, that sort of mercurial quick wit is everything. The first thing that draws you to an actor is that they can think quickly – you sort of take for granted the technical fluency and competence. Or you should be able to take that for granted. Another thing is a capacity to be still, when necessary. Not to feel that everything has to be filled with a movement or a gesture. Having the inner confidence to be in repose, because that has enormous authority. And then an inherent ability to use space: there’s this myth that being centre stage is always the best place; it’s not. The best actors are always the ones who know how to use space. Bad actors just kind of stand there whereas good actors always seem to find themselves in the same relationship to the other actors in the space. They seem to be able to define space. And it may be a stupid thing to say but what distinguishes the real actors from the non-actors is a desire to communicate. If you look at Judi Dench, she always wants to communicate with the last person in the last seat. If you don’t want to do that, then you shouldn’t really be doing it, because it’s a basic lack of desire to ­– on a crude level – make yourself heard. Those are a few of the ingredients.

Would these qualities be any different if you were looking to cast someone for a screen role as opposed to a stage role?

No, I think not. Because it’s about the desire to communicate. We’ve all seen actors who think they’re communicating and think they’re giving a great film performance, and it’s inert. Of course there are massive differences between film acting and theatre acting. The quality I mentioned earlier that is so attractive in the theatre – the mercurial quality – sometimes looks insane on film, over busy. So of course you have to adjust, but it doesn’t mean that you aren’t animated and you aren’t desiring to communicate. If it’s all for yourself, then it doesn’t communicate. With film, the critical thing is it only matters when you’re turning over. It doesn’t matter what you do before, what you do after, how wonderful you were in rehearsal. That’s the moment. It either lives or it doesn’t live. Whereas on the stage, you’re in much more control.

Can you answer that same question in regards to child actors? Obviously you first cast me when I was 12 [in Mary Poppins].

I find you have to go into a zone in your brain where you sort of switch off your objective faculties of judgment. Because often the children who are very competent are the ones who’ve been to stage school. In fact, I’ve just been auditioning eight year old boys. The least interesting were the two who had been in Billy Elliot because they’d become little actors. The fascinating ones were the ones who were just natural. Now, the really good ones can be both highly skilled and experienced and appear natural. That’s exactly what you were, this supremely skilled 12 year old. At the same time you were truthful and natural. After all, the game of acting is pretending to be natural, pretending to be spontaneous. You rehearse and rehearse and rehearse in order to appear as if you’re making up the lines as you go along. With child actors, I’ve found if you go into a sort of blank and let your instinct take you, it works. It took me towards Charlotte, who was just brilliant. It’s definitely more instinctual than casting adult actors.

When you’re casting an adult actor in a big film role, how much do you rely on what they’ve done previously or who they’ve worked with? Do you canvas opinions?

If I need corroboration, I’ll occasionally call somebody, but it would be more about how they had worked with them rather than, “How good do you think they are?” But then I work with casting directors who I know pretty well. I know if they’re saying, “I think X is really interesting” that I can rely on them. But I don’t go around canvassing a lot of opinions, and sometimes you think, “They were amazingly good in that – that’s astonishing because the person who directed it is terrible.”

[Laughs] Do you think acting’s changed over the years? Do you see things in younger actors now that are very different from younger actors of a few years ago?

Oddly, it changes from generation to generation. You would think that holding a mirror up to nature, which is the art of acting, shouldn’t be subject to fashion, but it is. If you look at 1930s movies, it’s astonishing how stylised they are. If you look at the period I was growing up in – the 1960s – the movies seem astonishingly stylised. And yet human beings, broadly speaking, have remained the same. It’s weird. It’s the same as in painting. You look at medieval painting before they discovered perspective and you think, “But can’t you see that everything is in perspective?” And then perspective comes along and it’s a revolution and people are looking at the world in a different way. So it does change. And speech changes: you hear politicians speaking estuary English when you know they’re perfectly capable of articulating clearly. It’s really annoying when actors can’t articulate clearly, particularly in musicals. If you look at the way Shakespeare is played now to the way it was played 40 years ago, it is very different. But it’s a style and we can’t predict what it’s going to be.

What are the dangers of typecasting for young actors? Is it better to turn down a high-profile role with a big director because the character is a facsimile of ones you’ve played before, or would you advise taking any role to build up your profile and, hopefully, work towards having more choice?

Young actors should just keep working. It’s agent talk, all that, “You should preserve yourself for this.” Just work for goodness sake, particularly when you’re young. It is alarming to find over-protective agents saying, “Don’t do theatre, it’s bad for you to do theatre, hang out for this…” It doesn’t make the slightest bloody difference, and it’s just bad thinking to play it like that. Good work is good work whether it’s on film or television. The money’s different, but a 23 year old should not be worrying about the money.

Is that how you escape typecasting? Just by working all of the time and playing a variety of roles?

Exactly. That’s also how you learn. You learn by watching other people and you learn by developing taste, which they don’t teach you in schools. But if you’re just sitting at home waiting for your agent to call, or flying to Los Angeles for casting calls, you’re going to learn nothing, except that it’s a miserable business.

In the States, you kind of have to make a choice: east coast or west coast? And if you’re going to stay in New York and be part of the theatre community, it’s a philosophical choice, it’s a life choice. Whereas here there’s masses of good theatre and good television. Very seldom good movies but there’s stuff going on. You can work in all media. And I think the more you do the better.

As a director, do you react well to an actor lobbying you for a role they think they’re right for? Or do you prefer to be left to your own decision making?

No, I like it when an actor says, “I’m really, really keen to play this.” In fact, there’s somebody in the cast of the play I’m working on now – a wonderful actor ­– who did lobby. He wrote me a letter saying, “I happen to have read this play by accident, I would love to be considered for X role.” And reader, I cast the actor.

Is it just about opening your eyes to somebody you might not have thought about? And surely it doesn’t always work?

Quite often they’re lobbying and you think, “Well, no…” And you just have to let them down gently. But no, I rather like it.

What advice would you give to a young actor if they find themselves in a situation where they’re not getting on with their director? Should an actor always defer to the director’s wishes?

You would have to give me a specific situation because it depends. As a general rule, I abhor any form of dictatorship, and I think it’s a misconception that directors should be dictators. It’s a partnership. The director’s not the person who is going to have to stand on stage or appear on screen – they’re not the people who take the ultimate risk. So I think they should listen. And sometimes there’s a disagreement. But you just have to remember it’s not the fucking director on screen or stage. There’s so much folie de grandeur about directors, particularly in the movies.

Do you hear many horror stories?

You only have to hang around in a pub with a group of actors. I mean, a lot of directors in films – and this is the horror story – actually don’t like actors. Don’t like talking to actors. Don’t like the company of actors. Don’t admire what actors do. And regard them as a sort of necessary inconvenience, a necessary prop to fill out their genius. I love actors. What they do is wonderful. It’s supremely skillful and brave and witty and humane.

Is an actor turning up unprepared the cardinal sin for a director?

That’s the most extraordinarily unlikely thing. I can’t remember the last time that happened. It is sort of unforgiveable. You’ve got to bring something to the party. It’s never happened to me but I would certainly never work with that person again. You can’t turn up having not done the work. It’s just lazy.

We all know how competitive the business is for young actors. Do you have any other advice apart from, ‘just keep working as much as you can…’?

I honestly think keep working. I can think of another young actress – I think it was her first job that I worked with her [Vincent In Brixton at the National Theatre in 2002] – Emily Blunt. She was 18, 19, and absolutely exemplary. She just worked and worked and worked, and got into films, and worked properly. She worked hard. And Charlotte, you come with tremendous gifts as a singer and dancer, in addition to being a good actress. There’s never going to be lack of choice for you. I guess the difficulty would be if you’re offered a great part in a musical, do you do that over a film? These are the choices that actors have to make for themselves. It’s tough. But it’s a lot tougher if you’re sitting out of work six months in a flat in Tooting.

I suppose there’s not any advice you can offer for those situations.

As a director who works so much in theatre, do you get as much enjoyment working with actors on screen?

I do. The last film I did was a film for television [The Dresser]. I shot in March with Tony Hopkins and Ian McKellen and I had the most wonderful time with it. It was fun on a cosmic level.