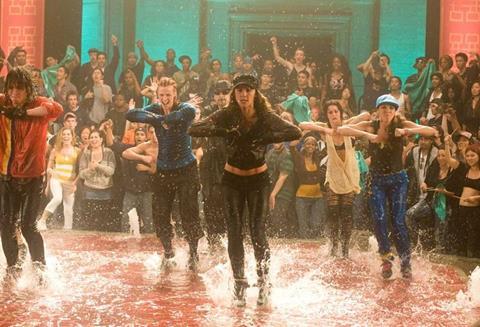 For all the advances in digital technology, Step Up 3D tries to serve as a reminder that the human body is and remains one of, if not the most, engaging big screen special effects there is. Unfortunately, loud and insurmountable narrative gear-grinding completely derails the energetically pitched third installment of the popular dance series, which never convincingly locates any sort of emotional pulse amidst its occasionally dazzling choreography.

Whereas Step Up 2: The Streets had a smart sense of scale apportioned to its conflicts, Step Up 3D is always ludicrous when attempting to sound dramatic keys.

The star-free Step Up franchise has proven a lucrative machine for corporate parent Disney, with the first two films racking up just under $265 million combined, and the second installment, also helmed by Jon Chu, dramatically increasing its percentile foreign returns. Similar mid-eight-figure returns can be expected here.

A holdover from the previous installment, NYU freshman Moose (Adam Sevani) finds his plans to eschew dance for an engineering degree disrupted when he falls in with a tight-knit group of street dancers, headed up by aspirant filmmaker Luke (Rick Malambri). When foreclosure on their warehouse haven looms, Moose and fellow newcomer Natalie (Sharni Vinson) are drafted to join the squad and compete against a rival crew in a high-stakes contest with a big cash prize.

Presumably tasked with executing an utterly ridiculous concept in which a dance crew, once embarrassed in public, will stalk and menace someone (“They’ll find you, and battle you”), screenwriters Amy Andelson and Emily Meyer nonetheless fail to put any sort of shine — by way of catchy dialogue or unforeseen conflict — on the proceedings. Whereas Step Up 2: The Streets had a smart sense of scale apportioned to its conflicts, Step Up 3D is always ludicrous when attempting to sound dramatic keys.

A handful of discretely conceived set pieces (an absurd ballroom sequence, and a single-take street scene, meant to summon memories of Gene Kelly), meanwhile, feel shoehorned in, and clash wildly with the dance-contest storyline hamstrung by its own many implausibilities, including that this supposedly international contest boils down to two New York groups, and dancers can apparently join and switch rosters until showtime.

In bits and pieces, director Chu still locates the pure thrill of personal expression found in dance. He and cinematographer Ken Seng evince a nice sense of composition, but yawningly overplay the 3-D elements, leaning on old gimmicks involving bubbles, balloons and water.

Sevani, who brought a loose-limbed sense of comedy to the series’ second installment, is ill-fitting even as an unconventional lead, and none of the other performances make a mark.