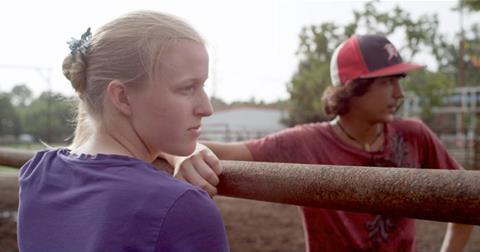 Tantalisingly balanced between documentary and minimalist fiction, Stop The Pounding Heart sees Italian director Roberto Minervini exploring a curious borderline between cow-punching and Bible-bashing. Representing Minervini’s third visit to Texas following The Passage and last year’s Low Tide - and featuring some of the same real-life personalities - his latest film is essentially a documentary with some staged sequences, lyrically but unfussily shot and at times achieving a phenomenal intimacy with its subjects.

Minervini’s achievement in this quietly impressive film is to let us see what’s exceptional, rather than just odd.

Depicting a devout Christian community, and especially a family of goat farmers, Minervini focuses on the unstated (till the end) anxieties of a teenage girl (Sara Carlson) raised religious but beginning to have doubts about what she’s been taught is her calling in life. The film’s austerity and largely non-narrative approach won’t win too much exposure outside festivals and specialist documentary distribution, but it’s a distinctive, quietly individual piece that will appeal to lovers of gritty, downbeat Americana.

Filmed in Texan locales including Dayton, Houston and Austin, the film is largely set in a rural area around Waller where the Carlson family - father, mother and 10 children of various ages - run a goat farm, taking their cheese and other dairy wares around local farmers’ markets. The parents are devout Christians, schooling their children at home, partly because they believe schools - explains Sara’s mother Leeanne - can expose children to bad influences. Teenage Sara and sisters have been taught they should settle down with one man, and that woman is intended by God as a man’s helpmeet - and while her sisters seem to take this as read, it’s suggested that Sara is having strong doubts.

Meanwhile she may be forming an attraction to a local boy, Colby Trichell, also from a huge family, and a mainstay of the local rough-and-ready rodeo circuit - very much a working class pursuit around Waller and an entertainment extremely low on production values. The film alternates between scenes of the Carlson and Trichell families, with a number of visibly staged scenes - notably a tentative initial meet between Sara and Colby - offering a hint of narrative in the otherwise documentary-styled framework.

The film revels in a very casual roughness, notably in the sound recording, much of the dialogue giving the term ‘mumblecore’ a particular rural Texan spin. The hand-held photography, which gets us right into the thick of the characters’ everyday lives, is sometimes leavened with a lyrical touch, especially in its sun-dappled shots of the pensive Sara. What comes to mind is something between the outdoor poetics of the Terence Malick school and the composed grittiness of revered photographer William Eggleston.

What’s most fascinating about the film is its approach to religion: in this community, every rodeo meeting is prefaced by prayers. Leeanne Carlson is a fascinating character, talking to her children in terms that are downright reactionary, indeed fundamentalist; yet her laid-back, delivery makes her comes across as surprisingly sympathetic. Whatever her beliefs, she clearly registers as a tender parent.

Leeanne comes into focus especially in a scene at the end, an extended take in which she and Sara talk over the latter’s doubts. Here Minervini achieves remarkably touching, unintrusive intimacy with the two women; this is the film’s dramatic hub, also contributing its title (words from a prayer of Leeanne’s).

A sequence showing a real birth - in which Leeanne participates as birthing assistant - brings an additional shot of mud-and-blood authenticity. Amid the realism is the odd enigma, such as the mediaeval-style dresses that Sara and sisters wear on a picnic. These people may lead an exceptionally odd life, but Minervini’s achievement in this quietly impressive film is to let us see what’s exceptional, rather than just odd.