'The White World According To Daliborek': Karlovy Vary Review 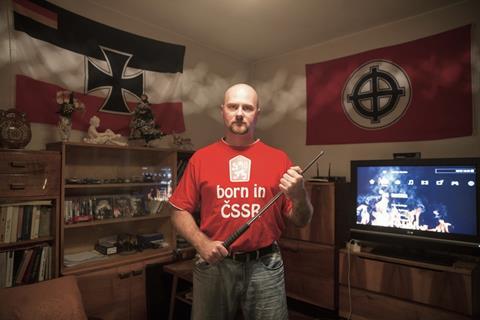 Scratch a bigot, find a buffoon. So says The White World According to Daliborek, an absurdist documentary that works best when it lets its Czech neo-Nazi protagonist reveal his cretinous nature all by himself. This portrait of the titular Daliborek plays like a deadpan mix between Grey Gardens and This Is England, taking an angry white nationalist and showing the bewildered man-child he really is, and operating as kind of testament to the idiom that sunlight is the best disinfectant. Inchoate hate-speech notwithstanding, the film is most disturbing when Daliborek’s oafish ineptitude turns him into comically endearing character.

Premiering at Karlovy Vary, this jangly mix of tones should prove appealing to fans of director Vít Klusák, best known in the Czech Republic for politically-minded provocations Czech Dream and All For The Good Of The World And Nosovice. Global anxieties about the rising far-right might also offer his latest work wider international exposure, not only because the film tackles the roots of those extremist hate groups, but is equally unafraid to rap them on jaw when the time calls for it.

“Welcome to my hell,” says Daliborek in the opening line, and for the 100-odd minutes that follow we learn exactly what he means. Pushing 40 and still living with mum, he spends his days working a low-wage industrial job and his evenings posting angry rants, misogynist songs, and homemade horror films to YouTube. Though he spews venom like the best of them, its unclear if Daliborek has ever even seen any of these minorities he claims to hate so dearly; though he writes sexually derogatory songs, its equally unclear if he’s ever been with a woman.

At least the latter changes over the course of the film, which follows Daliborek and his mother Vera as they both couple up. Klusák shoots this freewheeling portrait as a series of rigidly composed wide-shots, often with a certain distance from the figures onscreen.  Giving the environment and characters equal space in the frame, Klusák stares racial nationalism head-on and sees its inherent tackiness. Iron Crosses and Confederate flags share wall-space with commemorative figurines and felt paintings, a reminder that for all his bark, Daliborek’s nationalist identity is just another bit of decorative kitsch.

Klusák intersperses the filmed footage with excerpts from Daliborek’s idiosyncratic videos, many of which have the singular quality of outsider art; but for its repellent message, Daliborek’s output can be oddly naive. In one home-made backyard slasher pic, he stalks a couple of cohorts in blackface, and the scene takes on a grimly silly dimension when in lieu of makeup, his actors smear Nutella all over their faces.

The film changes gears for a sure-to-be controversial epilogue, which takes Daliborek and family out of their small town comfort zone and sends them on a guided tour of Auschwitz. Whereas up to this point, the film succeeded by depicting these ridiculous figures in their own element, this epilogue feels more like a reality-TV stunt. Instead of sending audiences out pondering the corrosive effects of racist ideology, they may instead focus on the politics of representation and just what role a documentarian must play.