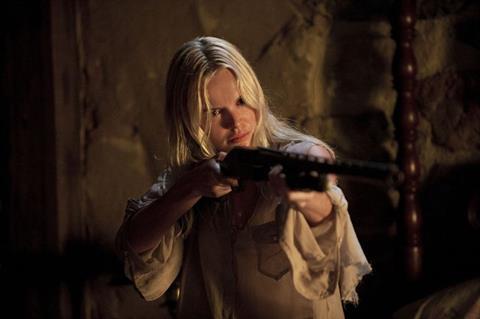 While it may not have the force of Sam Peckinpah’s 1971 original, writer-director Rod Lurie’s redo of Straw Dogs still holds up as an entertaining thriller with more than just shock value on its mind.

The violence is less starkly brutal and, not surprisingly, less shocking than it was in Peckinpah’s film.

The added edge might not count for much at the box office, but the new American South setting could be an advantage when the R-rated remake opens in the US this weekend through Sony’s Screen Gems. Limited star power will be a drawback internationally, though the casting of Swedish name Alexander Skarsgard could help in a few markets.

Lurie, who apparently based his script more on Gordon Williams’ original novel than the Peckinpah film, doesn’t simply change the setting from rural England to present day small town Mississippi. In this version, the new arrivals in town are Hollywood screenwriter David Sumner (Enchanted’s James Marsden) and his actress wife Amy (Kate Bosworth, from Superman Returns).

The locals who take against David and eventually besiege the couple’s home are led by Amy’s ex-boyfriend Charlie (Skarsgard, best known in the US from cable series True Blood) and the town’s former high-school football coach (James Woods in fine manic form).

Lurie takes a number of scenes and lines directly from Peckinpah’s pessimistic and, to many, misogynistic version of the story. But he also introduces fresh elements that allow him to explore slightly different themes.

The violence is less starkly brutal and, not surprisingly, less shocking than it was in Peckinpah’s film. Lurie’s version of the infamous rape scene, though, still makes for a disturbing few minutes viewing.