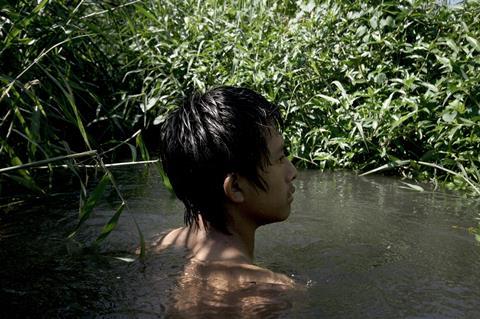 One straight storyline cannot convey the indecipherable complexity that is contemporary Mexico. The fourth feature since 2007 by the prolific 28-year-old Pereda, Summer of Goliath interweaves two plot strands that take place during a hot summer in the verdant but poor rural community of Huilotepec, with rich digressions capturing culturally-specific textures and helping flesh out several characters.

Its hybrid structure, which puts some demands on the viewer, will limit the commercial prospects of this low-budget revelation.

In the mix are semi-improvised documentary-style interviews with others that provide additional information on the current state of the locality and its inhabitants, further delineating the internal tensions laid out by the director.

Winner of the top prize in the Orizzonti section of Venice, from where it went to Toronto, it is having its domestic premiere out of competition at the Morelia Film Festival. Already embraced by critics, its festival life will continue unabated, but its hybrid structure, which puts some demands on the viewer, will limit the commercial prospects of this low-budget revelation. Some of the density is overcome by the accessible naturalistic shooting style and clarity of presentation, and the strong, credible performances could be a plus. Los Angeles-based sales agent FiGa Films is experienced with the global market for unconventional Latin American movies.

In the primary plot, Teresa (Sanchez) has just been dumped by her husband. She is unable to adapt to unaccustomed loneliness. Her sole companion is her layabout macho son Gabino (Rodriguez), a low-rank soldier who, with his military buddy (Torres), is more adept at harassing locals than dutifully searching the few cars that pass through the town for contraband.

Hefty Teresa has been so domesticated that she always wears an apron over her clothing, whether she is washing dishes or, as almost all of the characters do during half of the film’s running time, walking along small paths and minor roadways. She is unable to decide whether or not to discard her spouse’s clothing, and she pesters the semi-literate Gabino to get a paying unskilled job and to deliver oral messages to his father. Her physical movement as she rushes around town and the mostly negative encounters she suffers provide a formal and narrative thread that holds the film together. In the final scene, her bizarre actions brilliantly underscore her rattled state of mind and bruised psyche.

The other storyline is the mostly documentary-like portrait of Goliath, also known as Oscar (Oscar Saavedra Miranda), a 16 year-old boy accused of murdering his girlfriend. Off-camera, Pereda asks opinions on the matter from several youngsters, most of them members of the boy’s extended family. Some stand by him, while others recount the compelling evidence against him.

Coupled with the travails of Teresa, the scenes of and about Oscar ooze despairing feelings of suspicion, rivalry, and hatred, often based on little but rumor, that have come to dominate life in Huilotepec, a microcosm of the troubled Mexican social order. Pereda has the uncanny ability to touch on a wide variety of problems in less than 80 minutes without his techniques ever being gratuitous or perfunctory.

Most of the adult men from the town are working in the US, leaving behind a rudderless, vulnerable community of women, old men, and youths. Teresa’s husband could just as well have crossed the border into the States forever. Fragmented families are the norm. Teresa is definitely tormented, although most of her concerns are economic. Pereda condenses several relevant themes, including the subjugation of women, into fascinating stories that dig quite deep.