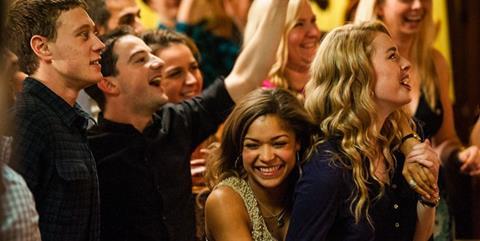 Sunshine On Leith oozes crowdpleaser from every frame. Dexter Fletcher’s hugely engaging adaptation of the popular Stephen Greenhorn stage musical is a soaring, big-hearted delight, transforming the songs of Scottish duo The Proclaimers into a joyous salute to love, loyalty and the pursuit of happiness.

There is always a certain cringe factor when actors have to burst into a song or a dance but Sunshine On Leith overcomes that hurdle from the very opening scenes.

The toe-tapping, feel good factor should translate into hefty commercial returns, especially in Scotland where it could be the most significant local success in a generation when it is released by Entertainment in October. The simple, heart-tugging story and global familiarity with The Proclaimers songs could also translate into international acclaim.

Forty years ago, the young Dexter Fletcher starred in Bugsy Malone. There have been precious few successful British musicals since then which makes it all the more fitting that he should add to their ranks with his second directorial venture. Sunshine On Leith is unashamedly brash and populist but handled with such confidence that it should easily entice the audience that found their perfect Saturday night, singalong entertainment in Mama Mia! It also has the wisdom not to take itself too seriously

A sweeping opening shot signals the cinematic ambition of a very polished production that makes the most of glowing, sun-kissed locations in Edinburgh and Glasgow. Ally (Kevin Guthrie) and Davy (George MacKay) are young soldiers who have returned from a tour of duty in Afghanistan to the warm bosom of their welcoming families.

Davy’s parents Rab (Mullan) and Jean (Horrocks) are about the celebrate their silver wedding anniversary and the romantic Ally sees their big party as the perfect place to propose to Davy’s sister Liz (Freya Mavor). Love is all around as Davy falls for Liz’s friend Yvonne (Antonia Thomas) but everyone’s fragile happiness is threatened by guilty secrets from the past and conflicting dreams of what the future might hold.

There is always a certain cringe factor when actors have to burst into a song or a dance but Sunshine On Leith overcomes that hurdle from the very opening scenes. Rousing anthems and gentle ballads are used to advance the story and express emotion. The good news is that virtually every member of the cast can carry a tune and make the songs work for their character. There is a raw honesty to some of the singing that is very touching and an exuberant energy to the big showstopping numbers.

Peter Mullan brings a gruff, poignant honesty to the romantic travails of Rab and although Jane Horrocks seems odd casting for a Scottish character she brings a warmth and stoicism to Jean. The film is also a terrific showcase for a very talented group of rising young stars. Kevin Guthrie displays a charismatic charm as Ally and George MacKay (For Those In Peril, How I Live Now etc) as Davy continues to build a reputation as one of the most versatile and accomplished actors of his generation.

Screenplay: Stephen Greenhorn, based on his stage musical