Rock and roll comedy Svengali is the first feature to come out of Martin Root and Jonny Owen’s new London based production company Root Films. 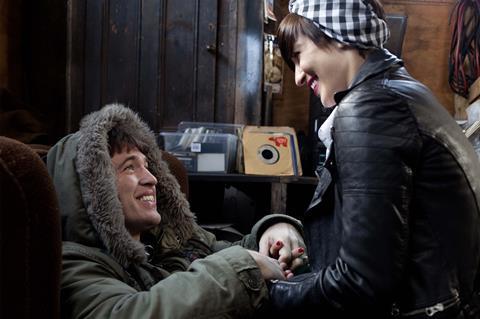 Synopsis: A small town guy from the Welsh Valleys is thrown into the cutthroat world of the music industry when he heads for the bright lights of London with his newly signed band

Director: John Hardwick who has directed music videos for Arctic Monkeys, Blur and Travis as well as TV dramas and theatre

Writers: Jonny Owen and Dean Cavanagh have written the screenplay based on their own nine episode hit you tube series

Producers: Martin Root and Jonny Owen for Root Films , an offshoot of design creative agency Root, set up by Martin Root over 20 years ago.

Next up: Root Films plan to produce two features a year and already have a number of other projects on the slate, including Blank Canvas, set against an art backdrop, which is written by Irvine Welsh and Dean Cavanagh, and is currently in development. They are also developing a comedy sitcom and are currently in talks with a broadcaster.

Hardwick’s next feature will be Ten Dollar Journey, a feature length documentary in which he followed a 10 dollar bill round the US for a month, to create a portrait of America. The film was self financed and is now in the edit.

Jonny Owen: We met a few directors. John had a music background which was the key. He was keen and passionate. He just got the sensibility of it.

John Hardwick: I didn’t know anything about Svengali until the end of last year. But then I read the script and watched the youtube virals. They were done really well, the characters were charming, and you could see how it could be turned into a film. It was a no brainer for me.

On shooting in London:

JH: People have mostly been very accommodating. On music videos, people would hear you were a film crew and screw you for money. People are more aware now that there is not as much money around and when you say you are low budget, you really are low budget. But it is really ambitious. We are constantly on the move. I think we are pulling it off. We are certainly having a lot of fun doing it.

On the film’s potential audience:

JO: Thousands of people watched the youtube series. We’re lucky because we have a ready made audience. They are keen to see what we do with the film. Not many films start with already having a fan base. My father is 72 and he loves rock and roll. The audience can be an age, because every generation has loved its own kind of rock and roll.

Martin Root: We think this will travel. Our investor showed the script to one of the people he works with in the US, who loved it.

JO: There was a definite philiosphy behind the script. We overwrote the script. I put a lot of narrative in there. I asked the actors to roughly learn what they should do..then I took the scripts off them and gave them key notes and said to them, you move how you think you should. I was keen to keep it very relaxed, very open, to make it as real as possible. I wrote the parts for actors that I knew would be comfortable with that.

JH: It is a great script. But we also have been brave and improvised lots of it. It seems to get fresh results. Things are less controllable then..continuity hate it because it makes the editor’s life more difficult, but it makes for a better film.

On the tone of the film:

MR: It’s a feel good story and essentially a love story. It’s also about the love of music. It’s about making sure it’s a real film that has an edge to it.

JH: We are trying to achieve a heightened form of naturalism, with energy and colour, and hopefully a similar vibrancy to a film like Trainspotting.

On the film’s private financing:

JO: It was amazingly liberating. The big problem in the past was if you went to the official sources, everybody had an opinion, it was like script by proxy. With this we were just left alone to write it.

MR: One thing it has allowed us to do is to keep creative control, from the way it looks to the campaigns we run. I had known our investor for a while and he liked what we did. We spoke about projects before and this one really interested him. Since we launched we have had interest from a number of distributors, but we don’t feel the need to sign with anybody until we’ve got the finished film.

MR: We have always covered commercials and virals, so the natural progression was to get involved in features. Our long term vision is to make cutting-edge British films which resonate round the world.

JO: We want to be a young British production company that rather than talking about things, gets things made.