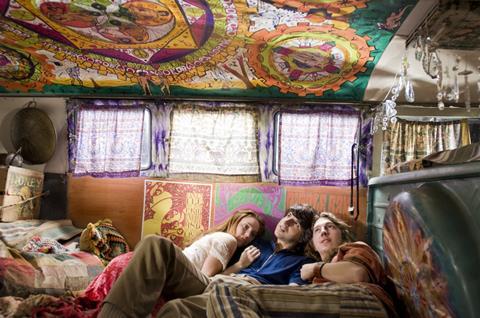 Taking Woodstock is a sweet, meandering salute to the transformative power of three days of peace and music that took place in the summer of 1969. A defining moment in American cultural life is seen through the conventional prism of a young man’s coming of age and assertion of his individuality. The underlying themes of family tensions and personal epiphanies are quintessential Ang Lee territory but this is a slender anecdote compared to the award-winning reach of more recent Lee ventures like Brokeback Mountain (2005) or  Lust, Caution (2007).

Fortieth anniversary nostalgia among the counterculture generation should create an initial curiosity among older audiences when the film is released in August, and younger viewers might also conceivably discover that the film’s laidback vibe chimes with the can do attitude of the Obama era. Taking Woodstock is accessible but very lightweight and should enjoy moderate commercial success as a specialised domestic release. The very American, softly sentimental nature of the film will make it a harder sell internationally.

Based on Elliot Tiber’s memoir, Taking Woodstock views Woodstock through its impact on the life of one man and his family. The event itself is only ever seen from a far distance and anyone expecting a glimpse of Janis Joplin or a blast of Jimi Hendrix will be sorely disappointed.

Instead, we follow interior designer Elliot (Demetri Martin) as he abandons Greenwich Village and returns to the rundown Catskills motel owned by his parents Jake (Henry Goodman) and the tyrannical Sonia (a very theatrical Imelda Staunton). The El Monaco motel is dirty, dilapidated and burdened by debt but dutiful son Elliot has put his dreams on hold to save the business. When nearby Wallkill refuses to grant a permit to a music festival, Elliot places a call to Woodstock Ventures. Soon the biggest ‘happening’ of the 1960s is about to land on his doorstep.

Taking Woodstock has an unobtrusive eye for period detail. True Grit is playing at the local cinema, the Apollo moon landings are on the television and the war in Vietnam has become part of the fabric of daily life. 1969 is the dawning of the age of Richard Nixon and the film raises a cheer for a moment in which hope had yet to surrender to bitter disillusion. If half a million hippies can live in harmony with the law-abiding folks of the American heartland then maybe for at least these three days anything was possible.

While the wider themes are persuasive enough its the smaller human stories that are disappointingly banal as Woodstock becomes a form of therapy for Elliot and his parents. The film fragments to include the stories of troubled Vietnam veteran Billy (Emile Hirsch), cross-dressing ex-marine Vilma (Liev Schreiber) and some half-hearted attempts to convey the staunch opposition and bigotry of  local inhabitants who would have preferred Woodstock to have taken place far from their front porches.

Lee almost seems to acknowledge that this is not enough to carry a two-hour film as he also fills the running time with impressionistic, split screen crowd scenes conveying a flavour of what it might have been like to attend Woodstock, something more than adequately achieved already in Michael Wadleigh’s Oscar-winning documentary Woodstock.

Taking Woodstock offers some obvious laughs and tugs at the heart strings as Elliot embraces his homosexuality and his parents learn to let go. Newcomer Demetri Martin has the air of a young Dustin Hoffman, Elliot Gould, Richard Benjamin or several performers who were breaking through to leading cinema roles at the time of Woodstock.

His gentle, guileless manner makes him perfect casting for Elliot without settling the matter of whether he is charismatic enough to have a sustained cinema career. Liev Schreiber brings dashes of sass and style to cross-dressing Vilma but Imelda Staunton’s dowdy, embittered Sonia is overcooked and all too reminiscent of  Shelley Winters in full flow.

Enjoyable in places and merely humdrum in others, Taking Woodstock ultimately feels like a minor Ang Lee digression in between more memorable works.

Screenplay
James Schamus, based on Taking Woodstock: A True Story Of A Riot, A Concert, And A Life by Elliot Tiber with Tom Monte