The Angriest Man In Brooklyn 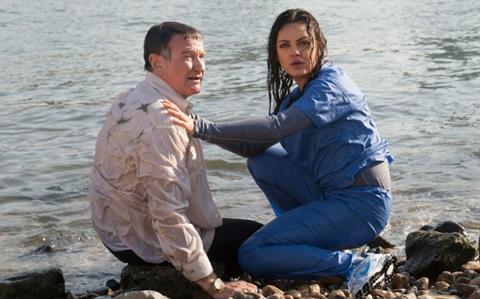 Robin Williams was initially the frontrunner for the starring role in director Phil Alden Robinson’s Field of Dreams, so perhaps, 25 years later, The Angriest Man in Brooklyn represents some sort of karmic closure for that collaboration that never was. It certainly doesn’t connect on any other level. A flaky, contrived and wearying dramedy in which a dying man frantically tries to right the fractured relationships in his life while an equally frazzled doctor tries to track him down in order to clarify her reading of his diagnosis, this clamorous offering fails to elicit either laughs or much in the way of sympathy.

Receiving a limited, 10-city theatrical release with a concurrent VOD window from distributor Lionsgate Films, The Angriest Man in Brooklyn could drum up some curiosity amongst the respective fan bases of its two leads, but seems doomed to otherwise suffer a quick, quiet burial.

Henry Altmann (Williams) is a seething malcontent whose day gets worse when on the way to a doctor’s appointment he gets into an auto accident with an Uzbek cab driver (Daniel Raymont), whom he proceeds to dress down in ugly, racially-tinged fashion. Filling in for Henry’s normal physician, Dr. Sharon Gill (Mila Kunis) is having a rough day herself, having just lost her cat. Reading the results of a recent battery of tests, Sharon sees Henry has a cerebral aneurysm near his brain stem. She gamely tries to inform him of her finding but, flustered by Henry’s bullying and insistence for a bottom-line verdict of how much time he has left, she impulsively tells him he has only 90 minutes to live, and Henry storms out of the hospital.

Henry first visits his brother Aaron (Peter Dinklage), with whom he works, and then tries to organise an on-the-fly reunion, only to discover an old high school classmate (Richard Kind) who holds a grudge. As the film progresses, Henry also endeavors to make amends with the family, wife Bette (Melissa Leo) and surviving son Tommy (Hamish Linklater), whom he has pushed away in the wake of the death of an adult son two years earlier.

A remake of the 1997 Israeli film The 92 Minutes Of Mr. Baum (apparently two minutes were lost crossing the Atlantic Ocean), The Angriest Man In Brooklyn is the type of movie that tries to mix comedic macings with august learned life lessons. In shrugging fashion, it acknowledges the illogicality of its conceit in a voiceover from Henry, part of a narration passed back and forth like a baton between its two main characters. Still, the concept just doesn’t track on a basic level, never mind all the logistical contortions that its dashes across New York City require.

Certain character bits (Sharon is revealed to be a pill popper) ring false, while unconvincing staging and editing missteps doom a healthy checklist of other sequences. When Henry scrambles to videotape a farewell message to Tommy and comes to realize that he can’t even tell his son he loves him without boiling over into rage, it’s an opportunity for the sort of bravura expressive monologue of which Williams is certainly capable. And yet the movie opts not for a single, uninterrupted take but instead awkward, choppy, in-camera edits, which makes no sense. Later, risibly subpar special effects work on the Brooklyn Bridge entirely undercuts what is supposed to be one of the more emotionally fraught scenes of the movie.

The Angriest Man In Brooklyn could be shot through with frustration and rage and still possess the sort of subtlety that would lend it a real-world rootedness. But screenwriter Daniel Taplitz’s adaptation is thinly imagined, and missing enough of the sort of quiet moments that would give these characters much-needed dimensionality. Robinson, meanwhile, seems only too happy to let his actors lean on histrionics.

In an admittedly underwritten role, Kunis tries to climb in the same ring of amped-up performance as Williams, to disastrous effect; she lacks the handling for believable hairpin emotional turns within a single scene. Williams hits all the requisite notes of sputtering rage, but captures precious little of the suffocating pathos at Henry’s core.

A few other recognisable faces pop up (James Earl Jones tests Henry’s patience as stuttering pawn shop salesman, and there’s a funny, unbilled, single-scene cameo from comedian-of-the-moment Louis CK), but this isn’t a creative high-water mark for anyone involved. Viewers are apt to leave with at least more irritation, if not outright anger, than they had prior to spending time with The Angriest Man In Brooklyn.

Screenplay: Daniel Taplitz, based on the film The 92 Minutes of Mr. Baum, written and directed by Assi Dayan