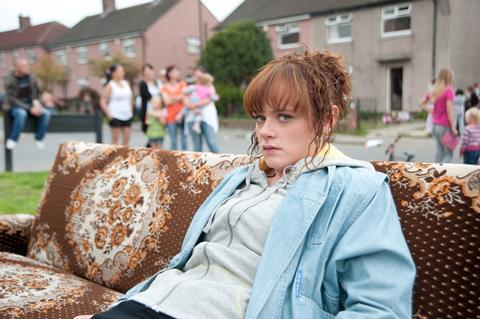 Director Clio Barnard’s fascinating and moving documentary about British playwright Andrea Dunbar opens with the on-screen message “this is a true story, filmed with actors lip-synching to the voices of the people whose story it tells”. It is a compelling technique that brings the story of Dunbar, told by her family and friends, vividly to life.

While the story of her life is told in a fairly linear fashion the unique filming structure truly sets it apart.

The film is perfect festival material with its clever blend of performance and documentary investigation, and could prove interesting for TV documentary buyers who know Dunbar’s work or see a link with the only of her plays adapted for the big screen, Alan Clarke’s film Rita, Sue and Bob Too! (1986).

Scenes from her productions are re-enacted on a piece of greenery close to Brafferton Arbor, the road where she lived on the Bradford estate, and while the story of her life is told in a fairly linear fashion the unique filming structure truly sets it apart. Also interwoven are extracts from a TV special made when Andrea’s first play was shown in London, with interviews with her and her parents.

Barnard spent some two years interviewing Dunbar’s family, friends and neighbours, and uses actors to lip-synch the interviews, virtually flawlessly recreating the thoughts of those who knew her. She died in 1990 aged just 29, but her three children – Lorraine, Lisa and Andrew – vividly recall the traumas of their childhood…their different fathers, how they were treated and how Andrea would drink heavily.

The film wonderfully balances Andrea’s writing and productions with the brutal realities of how her children recollect how troubled their early years were. The different elements are impressively stitched together as this essentially sad story.

Manjinder Virk is movingly impressive playing troubled Lorraine, especially when talking about the casual racial abuse she received as a child (her father was Pakistani) and her later lapse into drug abuse and death of her own young son Harris, while George Costigan (who, in an appropriate link, played Bob in film Rita, Sue and Bob Too!) appears as Jimmy ‘The Wig’, one of Andrea’s male friends.