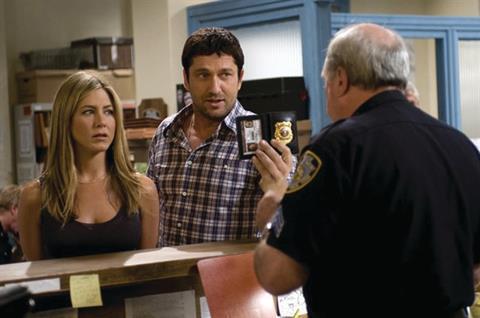 Jennifer Aniston and Gerard Butler may have generated tabloid headlines while working on The Bounty Hunter but they generate precious little on screen in this rarely funny or exciting romantic action comedy. The stars’ names and looks will have to be the main selling points for the Relativity Media/Original Film production, though the addition of action to the familiar romcom mix could pull in a few more male moviegoers than the genre usually attracts.

The campaign, and interest from the celebrity media, should result in a performance somewhere between the showings of the stars’ most recent romcoms.

Worldwide distributor Sony has given the film – which is being billed as primarily an action comedy – a big marketing push in advance of the wide North American release (with a PG-13 rating) this weekend. The campaign, and interest from the celebrity media, should result in a performance somewhere between the showings of the stars’ most recent romcoms – Aniston’s disappointing Love Happens and Butler’s mid-level hit The Ugly Truth.

Audiences are likely to be less forgiving in the international marketplace — the film is already out in the UK and reaches most other major territories during April – but there Butler’s marquee value could be especially helpful (The Ugly Truth and his 2007 romance PS I Love You both did better internationally than domestically).

The script by Sarah Thorp (2004 thriller Twisted) tries to make up for its lack of substance and originality with an overabundance of unlikely plot. Aniston’s Nicole is a hotshot reporter who gets arrested while chasing a story about a murder cover-up. Butler’s Milo is a former cop who, after divorcing Nicole, has become a boozy bounty hunter.

When Nicole skips bail to follow a lead on her story Milo jumps at the chance to take revenge on his ex by bringing her back to justice. Milo, in turn, is being pursued by a bookie’s henchman (Richie Coster, from The Dark Knight) and Nicole is being tracked by an enamoured co-worker (Saturday Night Live’s Jason Sudeikis). Also in the mix are Nicole’s mother (Christine Baranski, last seen in Mamma Mia! and here providing some rare comic spark), Milo’s boss (Curb Your Enthusiasm’s Jeff Garlin) and a rogue cop (Peter Greene, from Brothers in Arms) trying to stop Nicole from getting her story.

The chase takes the bickering exes and their pursuers from New York to Atlantic City and back again over the July 4 holiday weekend. The problem is not so much that the dramatic route is entirely predictable – it usually is in romcoms – but that the film never picks up any kind of speed.

Director Andy Tennant (Fool’s Gold, Hitch) manages to make a couple of the relatively few romantic scenes mildly affecting. But neither he nor the actors can wring any real laughs from the forced antics and lame dialogue that take up most of the first 90 minutes (something a bit more edgy might have been more effective, as it apparently was for Butler in the R-rated The Ugly Truth).

The occasional action sequences are no better and over its final 20 minutes the film feels like a bad episode of a male-female odd couple detective series.

All that remains to lend appeal are the settings – while the New York locations are curiously nondescript, Atlantic City looks quite enticing – and the stars.

The tanned and coiffed Aniston is certainly easy on the eye this time out, even if she seems less than inspired by the material. Butler’s role suits his laddish charm but his constant mugging obscures his good looks. And in spite of what the tabloids say there’s little on-screen chemistry between the two leads.