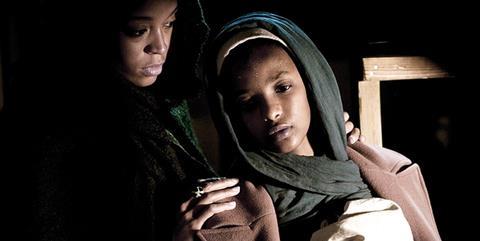 This Roman Catholic mass for the lost souls of the 21st century, officiated by one Italy’s most respected filmmakers, Ermanno Olmi, starts with a church being dismantled under the horrified eyes of an old parish priest and culminates in a warning that unless humanity changes the course of history, it will be history that will change the face of humanity. In between, the 80 years-old director offers a modern parable preaching love and understanding for the immigrants crossing the seas to seek a better life in Europe and encountering instead only hatred and threats.

This is the kind of movie sermon that many may find too idealistic for our jaded generation, but no one will doubt its sincere intentions.

Without a distinct plot, but loaded to the gills with messages, The Cardboard Village(Il Villaggio di Cartone) is a lavishly photographed production shot entirely inside what looks like a disaffected church, will adorn very festival in sight and grab plenty of Ecumenical awards, but its chances of ever reaching beyond are minimal.

Purely metaphorical at all stages, Olmi’s picture starts with the devastated Priest (Michael Lonsdale) collapsing over the altar of his church as the Sexton (Rutger Hauer) opens the doors to let in the workers who will remove all the church’s innards, paintings and sacred objects, to pack and send away for safe keeping.

Even the crucifix hanging above the altar is taken down, but not before a high angle shot suggests Christ himself is looking in dismay at the way his House is being treated. Later at night, a storm is brewing and sounds of fury are unchained outside - a police chase is obviously going on, with airplanes and helicopters up above, patrol cars rushing all over and sirens wailing at full volume.

People invade the empty church and the old priest, in the humble quarters he had occupied for the last 50 years, hears knocking on the door and cries of help. Faced with the illegal immigrants he chooses to ignore the secular edicts and respect instead the spirit of Christian charity - he not only opens the doors and allows them to put up their temporary makeshift lodgings inside (the title’s ‘Cardboard Village’) but also protects them to the best of his ability when the representatives of the law try to force their way in.

Some of the immigrants, that is the few who managed to survive the trip across the sea from Africa to  Italy, are terrified, others are under shock, many of them look pure and innocent, but a few are sufficiently enraged to plant bombs and blow everything up. None of them has a clear, definite personality of their own.

The same goes for the Priest who would like to help them but lacks the means, not to mention his own intimate doubts in the faith he is supposed to serve; the Sexton who would rather chase them away because they’re different, or the Doctor (Massimo de Francovich)  who, after surviving the concentration camps, believes God has forsaken all mankind.

They are all, of course, symbols rather than actual persons, an integral part of Olmi’s religious lesson, which includes some striking images of the church’s coloured visitors, arranged separately and in groups to quote the great classic portraits on religious themes, many of them (like Judas’ betrayal) suggested in the dialogs as well. Proceeding at a slow, deliberate, ceremonial pace, as any sacred service should and adequately supported by Sofia Gubaidulina’s music, this is the kind of movie sermon that many may find too idealistic for our jaded generation, but no one will doubt its sincere intentions.