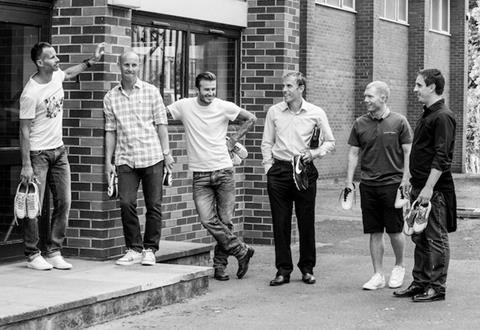 Though at heart very much a documentary aimed at the hard core legion of Manchester United football (or ‘soccer’ as some parts of the world describe it) club, British documentary The Class Of ’92 also offers a fascinating insight into the lives and attitudes of a remarkably down-to-earth group of players who played a vital part in the club’s success.

In the end it is about a dream coming true – the story of six young men who played together in a youth team who in a few short years made their  way together to the pinnacle of their sport.

The film, which had a series of on-off screenings in the UK and most likely has a longer life in home entertainment, has the additional selling angle that global brand/star David Beckham is one of the group of six players that the film focuses on. Sensibly the focus in not on him – though he comes across as remarkably grounded and modest – but on notion that great talents can come together and as a team produce something remarkable.

The film dwells on six members of Manchester United’s 1995/96 team - David Beckham, Ryan Giggs, Paul Scholes, Gary Neville, Phil Neville and Nicky Butt – who had risen from the ranks of the youth team to become some of the most celebrated players on the club’s history. It documents their careers from 1992 to 1999, culminating in United’s Treble triumph in the Champions League final in which last ditch goals against Germany’s Bayern Munich made it one of the best remembered finals.

At the beginning of that season, television pundit Alan Hansen famously wrote off Manchester United’s young side, claiming that “you’ll never win anything with kids”. They proved him so very wrong.

The structure of the film is quite straightforward…it tracks the development of the youth team they all played in, and then charts the momentous 1995/96 season itself set alongside chapters about each of the player, allowing them to recall highlights (and low-lights) of their career at Manchester United and in particular how they came of age in that season.

The likes of David Beckham, Ryan Giggs and Paul Scholes are perhaps best known of the six, but the film astutely treats them all of equals, playing on their growth together rather then individual skills or characteristics. They have plenty of time to offer opinions, but perhaps the scenes that work best are of the six of them sat round a dinner table, sipping red wine and displaying a warm sense of camaraderie.

Fellow footballers (and French icons) Eric Cantona and Zinedine Zidane offer insight on the football side of things, while the likes of Danny Boyle and Mani from The Stone Roses provide a view from stands, dwelling on culture and the impact the team’s momentum had on Manchester at the time. The film tackles how the Manchester vibe linked into a sense of new hope that spread through the UK in the 1990s – with former Prime Minster Tony Blair on hand to offer his viewpoint – but smartly the film doesn’t stray too far from its key strength as a footballing documentary.

The one person missing from the talking heads is former Manchester United manager Sir Alex Ferguson, who is only seen in archival footage and old interviews. But again, rather than hampering the story, the fact he is not a major part of the film simply helps bring the spotlight back on these six talented individuals. In the end it is about a dream coming true – the story of six young men who played together in a youth team who in a few short years made their  way together to the pinnacle of their sport.