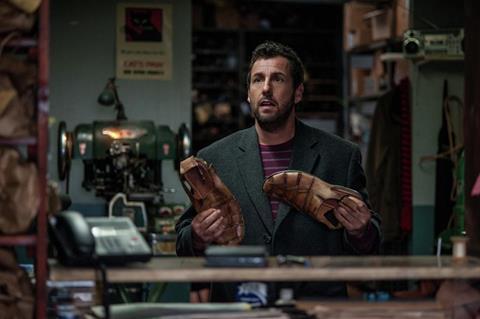 The Cobbler is a film of at least two distressingly different parts. Writer/director Thomas McCarthy begins by taking an ingenious, once-in-a-generation, Groundhog Day-style premise and embroidering it into a sweet and incredibly charming delight. Then, when inspiration flags, the film takes a disheartening turn towards the conventional as it lumbers through some criminal capers populated with pantomime meanies.

Adam Sandler underplays winningly throughout but none of that quite compensates for a film that promises so much but fails to deliver.

Then, it perks up a little veering towards a glib superhero origins vibe and a hint of It’s A Wonderful Life. Audiences tickled and delighted by the initial premise are only likely to feel disappointed by the way it pans out.  McCarthy deserves credit for trying something different and hard to categorise but even with the benefit of Adam Sandler and a strong cast this could be a tricky title to define and market.

Sandler’s Max is a fourth generation cobbler, working from a small family business in New York’s East Side and caring for his frail, elderly mother. He is a gentle soul who seems a little defeated by his life. When some equipment fails, he is obliged to use an old stitching machine in the basement to repair the snazzy shoes of neighbourhood tough guy Ludlow (Cliff “Method Man’ Smith). When Max tries on the shoes for size, he becomes Ludlow. It seems that any pair of shoes made on this magical old machine will allow him to walk in the steps of their owner.

The possibilities are endless as Max discovers he could be any age, sex or ethnicity as long as they wear a pair of size 10 1/12 shoes that pass through his hands. It is a clever conceit, suggesting a dozen different 1980s body swap movies all rolled into one. It also creates an interesting acting challenge as a succession of players are obliged to be themselves but channel their inner Adam Sandler to match his character’s personality. Busy Dan Stevens sustains the notion best as a dashing Englishman.

The possibility of inhabiting multiple personalities takes the film in some charming directions achieving some throat-catching moments when Max wears the shoes of his long absent father (Dustin Hoffman) to spend one last dinner with his mother.

The film has been cleverly thought through up until this point and then McCarthy seems to lose heart as Max becomes embroiled in the criminal activities of Ludlow and we are ploughing through a mundane tale of a slum landlord (Ellen Barkin in Cruella De Vil mode) intent on tearing down Max’s neighbourhood and building lucrative new housing.

It almost feels as if someone else has taken over the wheel of this vehicle and matters don’t improve with some jarring scenes of violence. The film really never recovers even as some elements of the original ingenuity and charm start to re-appear. There again the final ending doesn’t really hold up to close scrutiny and is just as likely to leave audiences snorting with disbelief and scratching their heads.

The film is polished and moves along at a jaunty clip and Adam Sandler underplays winningly throughout but none of that quite compensates for a film that promises so much but fails to deliver.