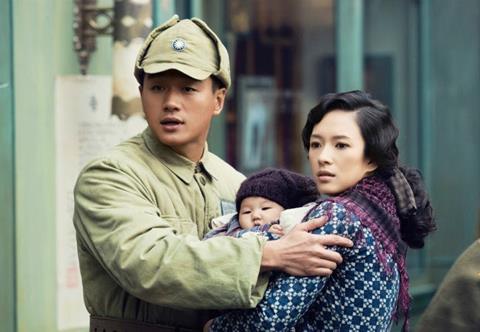 John Woo’s first directorial offering in four years is a grand scale war-time romance chronicling the plight of three unrelated couples whose lives become entwined during the Chinese Civil War. As was the case with Woo’s 2008 two-parter, Red Cliff, the eponymous event - in this case the tragic 1949 sinking of Chinese steamer the Taiping - is still yet to come, as this first installment delivers two hours of detailed set-up, with its feet firmly on terra firma.

The film certainly delivers as star-laden festive entertainment, but as just the latest in a long line of Chinese war-time epics, one feels The Crossing will need the fireworks of Part 2 to truly rise above the competition.

Despite a conspicuous lack of ocean-bound action, The Crossing Part 1 is awash with romance, conflict and drama as Woo positions his major players on both sides of the Taiwan Strait in anticipation of the fateful sailing. An internationally celebrated cast of Asian performers including Zhang Ziyi, Takeshi Kaneshiro and Huang Xiaoming bring weight to a well-balanced script from Lust, Caution scribe Wang Hui-ling, and top drawer technical credentials across the board ensure The Crossing will be a major player at the Asian box office through the holiday season.

On 27 January, 1949, the Chinese steamer the Taiping (from which Woo’s films take their Chinese title), departed Shanghai on route to Keelung, Taiwan. Licensed to carry fewer than 600 passengers, reports put the vessel’s actual headcount at over 1,500 that night, most of whom were refugees fleeing the advances of Communist forces through China. Sailing after curfew with its lights extinguished, the Taiping struck a smaller cargo ship and sank, taking almost all passengers and crew down with her.

The tragedy has since been dubbed “the Chinese Titanic” for obvious reasons, but while James Cameron opted to tell that story using a flashback structure as divers explored the wreckage decades later, John Woo stages an epic run-up to the tragedy through four years of bloody civil war. After the Japanese surrender in 1945, the uneasy alliance between the governing Kuomintang and the Communists disintegrated and the country resumed a bitter conflict from many years previous.

KMT Commander Lei Yifang (Huang Xiaoming), decorated for his part in the war against Japan, returns to Shanghai a hero and promptly falls for Zhou Yufen (South Korean actress Song Hye-kyo), the daughter of a wealthy banker. Despite her family’s objections, the pair marry and Lei promptly ships Yufen off to Taiwan for her own safety. There Yufen crosses paths with Dr. Yan Zekun (Takeshi Kaneshiro), who grew up in Japanese-occupied Taiwan and served as a medic for the occupying forces during the war. On return to Taiwan, Yan has discovered his Japanese lover Masako (Masami Nagasawa) has been repatriated.

Meanwhile, lowly KMT Communications Officer Tong Daqing (Tong Dawei) enters into a marriage of convenience with an impoverished young woman, Yu  Zhen (Zhang Ziyi) before being shipped out to the front line. While Tong experiences the full horrors of war first-hand, under the leadership of Commander Lei, Zhen suffers through a series of hellish misfortunes as she struggles to survive in a Shanghai being torn apart.

Woo offers audiences a mouth-watering tease of events to come, showing Yufen and Yan travel safely to Taiwan aboard the Taiping years before its fateful voyage. It is a beautifully rendered CG-assisted sequence, showing the steamer moored beside Shanghai’s famous Bund, while Woo’s signature doves flap around the ship’s name emblazoned across its side. While this is the only glimpse of the titular vessel in this installment, it proves one of a number of brief but welcome flourishes from Woo the one-time exorbitant stylist in a display of otherwise rather more austere filmmaking.

During its 128 minutes, old-school John Woo fans will pick up on the director’s notorious stylistic and thematic ticks, including slo-mo action beats, outrageous explosions (especially during an opening beach skirmish), male bonding, the near-omnipresent flapping birds and at one point even a Mexican standoff. That particular moment is punctuated by an audio-visual pay-off that delivers one of the film’s few genuine laughs. Woo’s fetishisation of handguns also features, as a needless close-up notes a character’s Belgian-made Browning as it is held to someone else’s head in a moment that surely should be focusing on the drama rather than awesome imported weaponry. However, it must be conceded that for the vast majority of The Crossing Part 1, the film is steered by an assured, if somewhat, anonymous hand.

Woo remains far more confident staging sequences of action than still moments of quiet deliberation. This observation is not reserved solely for actual battlefields; an early scene in which Lei meets Yufen at a lavish Shanghai ball feels momentarily awkward as the couple’s eyes lock, but when snowflakes fill the air and the lovers are swept onto the dance floor, the sparks truly begin to fly. Throughout the film, Woo employs props to punctuate - or perhaps invigorate - otherwise quiet emotional beats between characters. He will focus on a salt shaker, a stethoscope, or an automobile ignition, as if too bashful to look his lovers in the eye. While the result propels the film forwards, a degree of genuine emotional engagement is perhaps lost as a result.

Considering that Part 1 is essentially two hours of set-up for the action, tragedy and histrionics still to come, the performances remain largely measured and subdued here. Huang Xiaoming brings a commendable balance between his career-driven military man and the loving husband pining for his absent wife. Song Hye-kyo is given little opportunity to be anything other than a graceful trophy bride, but the stage is set for plenty of emotional upheaval in the second half.

Likewise Kaneshiro proves as effortlessly debonair as ever, commanding audience attention seemingly without doing anything (although in one flashback, the 41-year-old does attempt to pass himself off as a teenager, which challenges plausibility, despite his well-maintained looks). Tong Dawei pitches his liable everyman soldier spot-on throughout, demanding sympathy without ever feeling helpless. This leaves the real emotional burden of the drama at the feet of Zhang Ziyi, who endures an endless parade of torments and tragedies that will inevitably see her as one of the crew of the Taiping when Part 2 arrives next May.

The Crossing Part 1 is by its very nature a somewhat unsatisfying viewing experience, ending as it does not so much on a cliffhanger as eclipsed by the spectre of looming disaster. Without seeing the concluding chapter it is impossible to determine whether or not it was necessary to cleave the project in two, or whether a single hour’s worth of what is presented here would be ample set-up for what follows. On its own, The Crossing Part 1 manages to be more than simply a two-hour tease, but falls short of being a whole-hearted return to form from John Woo. The film certainly delivers as star-laden festive entertainment, but as just the latest in a long line of Chinese war-time epics, one feels The Crossing will need the fireworks of Part 2 to truly rise above the competition.