The End of Puberty 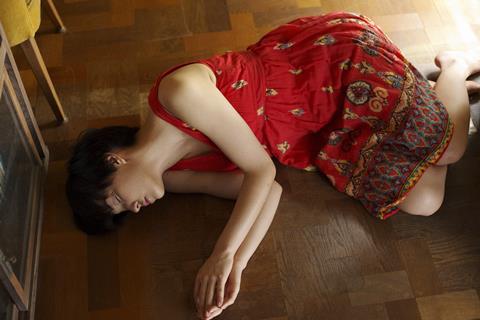 Tired of the same old sex-change comedies? The End of Puberty (Koi ni itaru yamai) comes up with a twist - a precocious schoolgirl seeks love by switching genitals with her male biology teacher.

Performances here are by the book, with crucial encounters punctuated with insistent music played on a toy keyboard that sounds like a telephone on hold.

The laughs are few in this improbably discreet Japanese farce, in which you never see the private parts that are supposed to fuel the humor. The End of Puberty by Kimura Shoko seems destined for a midnight movie berth at festivals around the world, although its two–hour slog of a running time could mean that most of the audience will be asleep when the director throws a curve or two at the end.

This oddity is unlikely to get a release anywhere in the US or Europe. In America, its subject would doom it to an MPAA rating that would ban the Cub Scouts that its humor targets from entering legally. The right marketing could still give The End of Puberty a video cult status.

The action begins in the classroom, where love-struck Tsubara (Wagatsuma Miwako) is obsessed with her teacher, Mr. Makota (Saito Yoichiro), who has all the sex appeal and the cookie-cutter manic mannerisms of Jerry Lewis. She longs for sex with him, and draws pictures of the two fused at the groin – literally.

He vomits at the prospect of sex, and has a nerd’s attraction to insects that he saves under pins in a box. When Tsubara grabs him below the belt, they exchange organs magically, and the farce gains speed. High concept this isn’t.

Performances here are by the book, with crucial encounters punctuated with insistent music played on a toy keyboard that sounds like a telephone on hold. Saito, as the sex-shy Makota, drools and retches in homage to The Nutty Professor. (There could be a job on a Las Vegas novelty revue for him.)

Wagatsuma plays teen-aged Tsubara with wholesome schoolgirl innocence as she wonders why sex is so hard to come by.  The tale of swapped sexes and confused characters takes on the earnest pedagogical tone of a fable, oozing from ponderous to pretentious.

The bare-boned production design is par for a low-budget Japanese comedy, shot mostly in non-descript interiors. Cinematographer Tsukinaga Yuta’sclose-ups of  Wagatsuma and of beautiful Satsukawa Aimi, who plays En, the sexually savvy classmate who eventually falls in love with her, bring glimpses of radiance to an otherwise silly endeavor.

Other distinctive images are the pictures that Tsubara draws of herself joined to Makota, which the film turns to in pivotal moments. The curvy line drawings have a childish and clownish sexual inventiveness, which make them curiosities within a bizarre attempt at comedy.