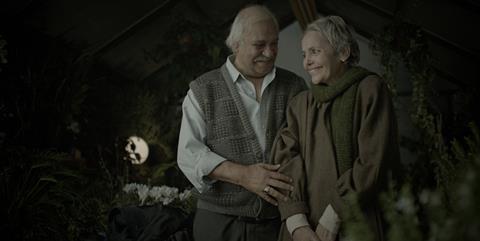 A comedy about dying sounds like a contradiction in terms, but in this case, the contradiction works. Tal Granit and Sharon Maymon’s black comedy, both witty and touching, about the unfunny issue of the right every individual should have to depart this world with dignity, manages to avoid the embarrassing pitfalls a humorous treatment of such a theme entails and though it is cracking jokes from the opening scene to the last, it also fully assumes the tragic aspects that are inevitable in this kind of story.

Not exactly the kind story that looks funny at first glance, and yet most viewers will often guffaw through it and come out with a wide smile on their faces, believing that death is maybe not as terrible as it seemed to be when they went in.

Screened in the Venice Days sidebar section, The Farewell Party (Mita Tova) is the first feature by a pair of young directors who have been working together since 2006 on other projects. It starts on a jovial tone, with an old woman getting a highly amplified phone call from a voice who tells her that since there is no available place in Heaven at the moment, she should go on with her pointless treatment on earth until something will be made free up there.

The speaker, the film reveals almost instantly, is her next door neighbor in an old people’s home, Yehezkel (Zeev Revach), who wants to keep ailing woman’s spirits up and prevent her from giving up the struggle.

Yehezkel, an amateur inventor in retirement, and his soulful, kindly, tender wife Levana (Levana Finkelstein) are the heart and soul of this yarn, but not the only ones there. They first get in trouble when their long-time friend, Jana (Aliza Rozen) begs Yehezkel to do something to help her husband Max (Shmuel Wolf) who is going through hell, his body rotten all through by cancer, and wishes to put an end to it all.

Levana is scandalised by the suggestion, but Yehezkel listens and then asks for advice, and soon enough they find another lodger in their institution, a retired vet, Daniel (Ilan Dar), who tells them that since he has put to sleep so many animals in his life, he sees no problem doing the same to a human being, if his sufferings are indeed unbearable.

Sure enough there is serious risk of getting in trouble with the law, for that he brings in a very close friend, Rafi (Rafi Tabor), a retired former cop, and ask Yehezkel to devise a mechanism that will allow Max himself to push the fatal button and end his sufferings, after he has duly confessed into a video camera that no one else is responsible.

Though it is all kept very much secret, on Max’s funeral there is already another candidate, Dubek (Josef Karmon), who knows - never mind how, comedies aren’t that meticulous on details -  about the whole thing and blackmails the friends to help his wife too, for everything else he has tried to help her, was in vain. They visit the lady, are convinced there is no other choice and the fatal procedure is repeated. But all through it, Levana, the only one who had opposed this crime against nature and morality, is having her own troubles, entering the early stages of Alzheimer’s when she would need special treatment that will take her away from her beloved Yehezkel, who adores her and wouldn’t hear about it.

The lighter tones of the first part grow darker by the minute, tragedy is of course looming at the end, as it does for everyone in this life, but the humour keeps the script afloat every time it gets just a bit out of breath (only natural at this age), the tragic moments are mitigated by a gentle resignation to the facts of life, and the immense sympathy for the characters carries the plot over several difficult moments when it almost falters.

The entire cast offers amazingly fine-tuned performances, particularly by gruff, heavy-set, lovingly bearish Revach, one of the country’s leading comics expanding his register for a change, Finkelstein, whose fragile, winning beauty survive even the debilitating early stages of dementia, that threaten to take over, and Ilan Dar, whose throwaway lines are providing the right kind of seasoning for this weird plot.

Not exactly the kind story that looks funny at first glance, and yet most viewers will often guffaw through it and come out with a wide smile on their faces, believing that death is maybe not as terrible as it seemed to be when they went in.