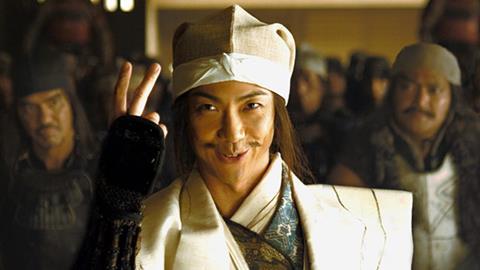 An epic period action-comedy packed with wonderfully over-the-top characters, great production values and some spectacular sequences, The Floating Castle (Nobou No Shiro) may well lack the samurai gravitas to be taken seriously by the art-house brigade, but it could well appeal to specialist distributors beyond its home territory as well as appealing to genre festivals.

Mansai Nomura is bursting with playful energy as Nagachika, while Koichi Sato is the perfect counterbalance as the stoical Tanba.

The film was set to open last year, but its Japan release was delayed until this November because of associations one of the sub-plots – about a massive flood used as a weapon – has with Japan’s 2011 tsunami. Given this context the scene is dark and poignant, and will naturally have a different impact in Japan than for international audiences. The film screened at the Tokyo International Film Festival.

Though running well over two hours, the film, co-directed by Isshin Inudo and Shinji Higuchi mixes playful comedy (often of the slapstick variety) with bloodthirsty action, and while based on a true story it breezily embraces the best traditions of Japanese period action films as a small band attempts to fight off a vast army.

Set in 1590, the powerful regent Toyotomi Hideyoshi (Masachika Ichimura) plans to unify Japan, but in his way is Oshi Castle, which lies into the middle of a lake. The regent sends a force of 20,000 troops under the command of General Ishida (Yusuke Kamiji) to take the castle – referred to often as ‘the floating castle’ – which is protected by just 500 men.

When his father dies, control of the castle falls to Narita Nagachika (Mansai Nomura), a clumsy but genial figure much loved by the local peasants – and referred to as ‘Bone’ or ‘Bonehead’ due to his good-natured ineptness – but held in little respect by the war-hardened samurai, apart from his old-friend Tanba (Koichi Sato).

General Ishida is supremely confident that his massive force will force the Castle to surrender immediately, but to everyone’s surprise Nagachika vows to fight, and with the peasants joining to support his modest army sets in place a series of plans to surprise the more traditional warrior methods of Ishida.

In typical ‘against-all-odds’ style, he has to win over the old guard of the castle. Tanba supports him and eventually he wins over fierce old samurai Izumi (Tomomitsu Yamaguchi) and ambitious young warrior Sakamaki (Hiroki Narimiya) - who has radical plans for the defence – as well as reassuring warrior princess Kaihime (Nana Eikura), who is secretly in love with him.

Nagachika might well play the fool, but he turns out to be a clever thinker in terms of oddball strategy. But despite winning skirmishes, Ishida eventually takes the upper hand by building massive dykes and eventually releasing a flood that sweeps through villages and much of the castle, killing all in its wake. It is easy to see why the footage of this “attack with water method” was deemed inappropriate to show immediately after the tsunami last year.

Mansai Nomura is bursting with playful energy as Nagachika, while Koichi Sato is the perfect counterbalance as the stoical Tanba. Tomomitsu Yamaguchi has perhaps the most fun as the snarling one-man-army Izumi, and while Nana Eikura is great as the sword-wielding Princess, her character is never really given enough to do, though she is striking when she has her on-screen moments.

Screenplay: Ryo Wada, based on his novel