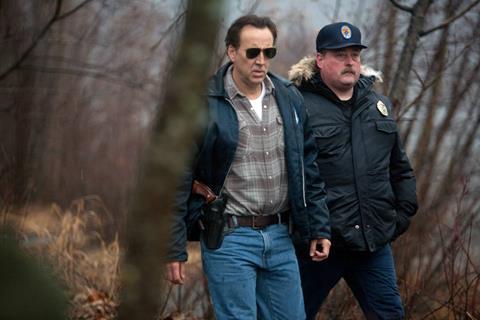 A bleak and deliberately dour police procedural that follows the real-life events surrounding Alaska’s most notorious serial killer Robert Hansen, a family man who over a period of some 12 years abducted and killed at least 24 women in the 1970s and ‘80s, the impressively staged The Frozen Ground is a striking platform for strong, intense and serious performances from Nicolas Cage (as determined cop) and John Cusack (as manipulative killer). While straight-forward in tone and structure, the film is admirably non-exploitative as it lays out the developing drama.

Nicolas Cage smartly tones down the quirks and excesses that can define some of his recent performances, and delivers an astute and watchable turn as a good man determined to keep a young woman safe and also track a devious serial killer.

The Frozen Ground has opened in the Europe prior to a late August release date in the US, and while unlikely to set the box office alight, the film sees Nicolas Cage offering up one of his most impressive performances for a while playing an honest cop determined to do the right thing, while John Cusack’s recent shift into playing more oddball and dark roles makes for the perfect counterbalance to Cages earnest vigour.

New Zealand writer/director Scott Walker makes his feature debut with The Frozen Ground, and has done a fine job in collating a plethora of information about Hansen and his killings and crafting the details into a film that, while it lacks suspense and emotional drama at times, is beautifully presented and designed and makes good use of the stark and tough Alaskan backdrops. The hand-held camerawork can be rather jarring at times, but it adds to the immersive atmosphere of the film.

The film opens with 17 year-old prostitute Cindy Paulson (a strikingly good performance from an almost unrecognisable Vanessa Hudgens) running into a motel screaming that somebody tried to kill. Initially not believed by police, she eventually comes to the attention of Sergeant Jack Halcombe (Cage) who is investigating the crime scene of an unidentified dead girl whose remains are found along the Knik River, a spend shell case found in her grave.

After hearing about Cindy’s story he tracks her down and starts to investigate Robert Hansen (Cusack), the man she claims abducted and raped her and was about to load her onto his plane before she managed to escape. Halcombe is determined to increase investigation of Hansen – who has been looked at, but put to one side by other investigators – but needs to keep Cindy safe so that she can give testimony. While Hansen plots to have her killed, Halcombe finds himself on a race against time both to keep Cindy safe and also the investigation on track.

Nicolas Cage smartly tones down the quirks and excesses that can define some of his recent performances, and delivers an astute and watchable turn as a good man determined to keep a young woman safe and also track a devious serial killer. For Vanessa Hudgens, the role of vaguely sleazy dancer/prostitute is another step on from Spring Breakers that she has truly put her High School Musical days behind her, and while there will be more than a little on-line traffic when it comes to her on-screen pole-dance routine she brings a strong mix of toughness and vulnerability to her role.

John Cusack also plays things toned down and tense to play the real-life serial killer, and acts as a perfect counter-balance to Cage’s almost heroic determination.

The naturalistic documentary shooting style helps accentuate the 1980s snowy backdrops, and while the cinema verite style works wonderfully at times it can lead to certain sequences feeling to drab and muffled when a little space and sense of location would have worked better. But it is clear the actors responded to the shooting style, and though the film deliberately avoids any showy mainstream style its strong series of performances help give it a sense if serious drive and energy.