The Gang Of The Jotas 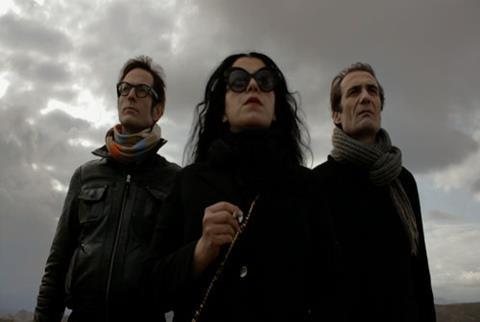 Marjane Satrapi has taken a break from animation, put aside her artwork and graphic novels and happily gone off out to have some fun in the south of Spain. Playing silly for an hour or so, she runs around hiding behind huge sun glasses and systematically arranges to clear the landscape of all males whose name start with a J (Jota in Spanish). If this sounds irrelevant and improvised no need to be surprised, that must have been the intention all along.

The Gang Of The Jotas (La Bande des Jotas) moves forward fast enough to avoid disturbing musings about the plot or the characters.

Satrapi wrote, directed and acts in this paper-thin lark that never pretends to have anything to say or make any sense. Eventually, given its high spirits, this might carve its own summer niche on the far margins of commercial cinema.

Starting with the old ploy of the misplaced suitcase, a mysterious, high strung and loquacious woman (Satrapi) realises she has picked up the wrong piece of luggage at the airport. She calls the owners whose name she finds on the suitcase tag and they most courteously come over to her hotel to make the exchange. Little do they suspect that for the rest of the film they will be stuck in the company of this person they have never met before and even worse, they will have to eliminate, one after the other, all the men she claims are threatening to kill her.

In no time at all The Woman, as Satrapi’s character is to be known all through the film, announces she is a Mafia moll on the run, and her two unwilling partners, Didier and Nils (Satrapi’s TAJ Productions partners Patrice Roche and Mattias Ripa) who happen to be innocent badminton players, gallantly agree to assist her. All three of them jump into their rented car to attend a party at the other end of the Iberian Peninsula, while doing away with all the suspicious characters they encounter on their way.

Soon enough the two amateur sportsmen act like regular hit men in parodies alternating between gangster films and westerns, while The Woman is feeding them fancy stories like the one about the failed film director who turned into the film critic of a far left newspaper, a position which allowed him to reveal the charms of the Iranian cinema to the unsuspecting Western audience. The recurrent joke, constantly repeated through this mini-saga, refers to the actual identity of The Woman, which she insists on keeping jealously secret. For anyone who happens to ignore it, Satrapi is an exiled Iranian living in Paris.

Shot in bright summer colours, with the added charm of the Spanish landscape and with a happy-go-lucky soundtrack, The Gang Of The Jotas (La Bande des Jotas) moves forward fast enough to avoid disturbing musings about the plot or the characters.  Satrapi & Co ham up the leading parts, just in case someone will take it seriously and since the three of them are responsible for pretty much everything going on in this picture (Roche is also the editor and Ripa the line producer)  there is no one that could possibly discipline them.