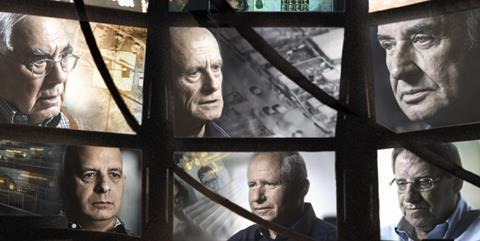 The blood-soaked history of the Israeli-Palestine conflict is revisited from the unique perspective of the former leaders of the Shin Bet, Israel’s secret service agency, in The Gatekeepers. Director Dror Moreh’s fascinating documentary is reminiscent of The Fog Of War in the confessional intimacy of its testimony and the valuable insights that only arrive with the benefit of hindsight.

These are remarkable conclusions from men who have spent their lives fighting Israel’s war on terror.

The combination of candid interviews and unfamiliar archive footage creates an intelligent and compelling film that sheds fresh light on an intractable situation. Further Festival exposure and specialist theatrical distribution should be guaranteed alongside keen interest from documentary channels and ancillary markets.

Moreh takes the Six Day War of 1967 as the starting point for an extensive overview of the subsequent Israeli occupation of Palestine and the question of why a significant military victory has never been transformed into a lasting political settlement. His focus is wide-ranging from the blossoming of hope at the time of the Oslo Accords to the assassination of Prime Minister Yitzhak Rabin, an act described by one Shin Bet leader ” that shattered all hope”. Moreh displays an ability to make complex issues accessible to the viewer and the use of computer animations based on photographs sometimes lends the film the air of a detective story.

Moreh’s real coup is in persuading six former Shin Bet leaders to speak on camera for the first time, revealing the practicalities of what they were prepared to do to protect their country and their thoughts on the moral and ethical dilemmas that confronted them. There is a chilling quality to the matter-of-fact discussion of targeted assassinations, torture and betrayal as if they were all simply part of another day at the office.

There are justifications and evasions, sly smiles and disingenuous comments. You begin to suspect that Moreh will not be able to break their professional calm and belief that they did want was necessary to protect the lives of Israeli citizens regardless of the legality or morality of their actions.

Any suspicion that the film risks being one-sided is undermined when the Shin Bet leaders discuss the bigger questions. Here, they acknowledge the mistakes of their political leaders. Avraham Shalom comes clean about the notorious murder of terrorists captured alive after the hijacking of the 300 bus from Tel Aviv to Ashkelon in 1984. Ami Ayalon is scathing about the failure of the Camp David talks. Yuval Diskin, who retired in 2011, talks of his government creating a Palestinian nation steeped in the violence of a people who felt they had nothing to lose. All of the Shin Bet leaders in some way reflect on a sense of history repeating, nothing changing and no lessons having been learned.

The heart of the film lies in the tension between the actions these men were prepared to sanction and the insight that has bequeathed them. For all the talk of collateral damage, retaliation and revenge, they all seem to reach similar positions that the only way forward is through dialogue and the only hope lies in a two-state solution. These are remarkable conclusions from men who have spent their lives fighting Israel’s war on terror.