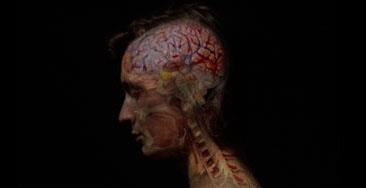 A low-budget, Italian-speaking contribution to two currently-thriving anxiety genres – the documentary horror/SF movie and the pandemic paranoia picture.  Though it doesn’t deliver much in the way of new thinking, it’s mostly an effective, upsetting account of an imaginary disease outbreak. The Gerber Syndrome (I Morbo di Gerber) first manifests symptoms easily mistaken for the flu, but infectees develop a heightened aggression in the second stage – and spread the disease by attacking, scratching and biting whoever gets in their way – before entering a terminal phase.

Whereas Contagion tries to stay away from the zombie outbreak movie conventions, this inclines a little to melodrama.

As in Steven Soderbergh’s much more healthily-budgeted Contagion, the plague is worldwide.  Writer-directoor Maxì Dejoie narrows the focus to Italy, as documentarians (played by the real filmmakers) follow two characters caught up in the bigger story: Dr Ricardo (Sax Nicosia), a doctor whose middle-class student niece Melissa (Valentina Bartolo) is infected, and Luigi (Luigi Piluso), an employee of a private security firm who have controversially been sub-contracted to round up victims for quarantine.

While Melissa’s case of Gerber runs its course, forcing her parents to make a hard choice about treatment, Luigi is out on the streets, troubled not only by the ill but by vigilante gangs who are taking advantage of the crisis to enjoy battering and burning victims.

Whereas Contagion tries to stay away from the zombie outbreak movie conventions, this inclines a little to melodrama – and also to the assumption that the authorities will deal with the disease in the most ruthless manner imaginable, familiar from 1970s exploitation (The Crazies, The Cassandra Crossing, Rabid, etc) and there are upsetting scenes with the untreated infected cooped up in a drab quarantine centre or brutal action on the streets.

With a rough-looking, mock-doc feel that derives from recent scare stories like [●REC], the film depends on its cast to bring conviction to drama scenes and staged, improv-seeming interviews.  Bartolo is the standout, shifting from bright, worried young woman to spitting harridan as the horror of Melissa’s situation sinks in.

The title on the print screened at the Science+Fiction Festival in Trieste is The Gerber’s Syndrome; the end credits list Gerber: Istoria di Melissa as an Italian title.